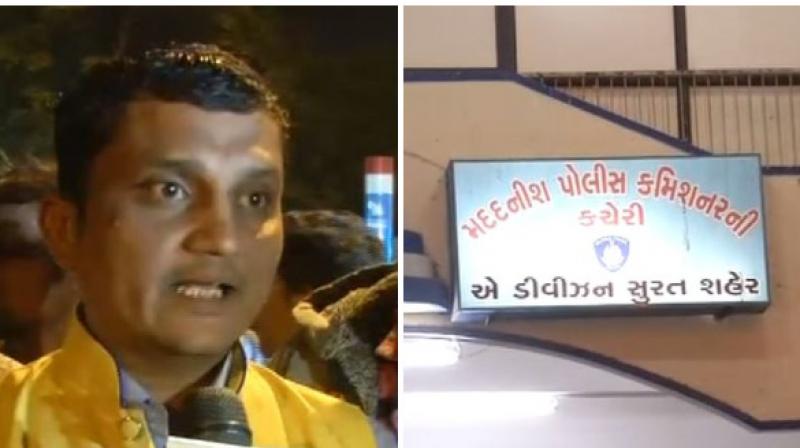 Speaking for the three Congress candidates, Jignesh Mewasa, a candidate from Congress said that they were merely inquiring about what the workers had done, but were detained by the police. (Photo: ANI)

Some PAAS workers had been detained in the Varachha Police Station for protesting against the office inauguration of the Bharatiya Janata Party (BJP) in Karanj.

Kathiriya, along with few PAAS workers reached the police station to get them released, and protested against the workers' detention. He was later joined by three Congress candidates.

Following this, all four were detained by the police.

Outside the police station, a candidate from Congress, Jignesh Mewasa said that the detained workers were not protesting.

"The PAAS workers were shouting slogans of 'Jai Sardar' but BJP made it out to be a protest against them, and taking help of the police, BJP got them arrested. This is not protest," Mewasa said, adding that the ruling BJP had resorted to dictatorship in the state ahead of elections.

Speaking for the three Congress candidates, Mewasa said that they were merely inquiring about what the workers had done, but were detained by the police.

The elections in Gujarat will be held in two phases on December 9 and 14.

The counting of the votes will be held on December 18.