The police officials identified one of the slain militants as top LeT commander Azad Ahmed Malik. 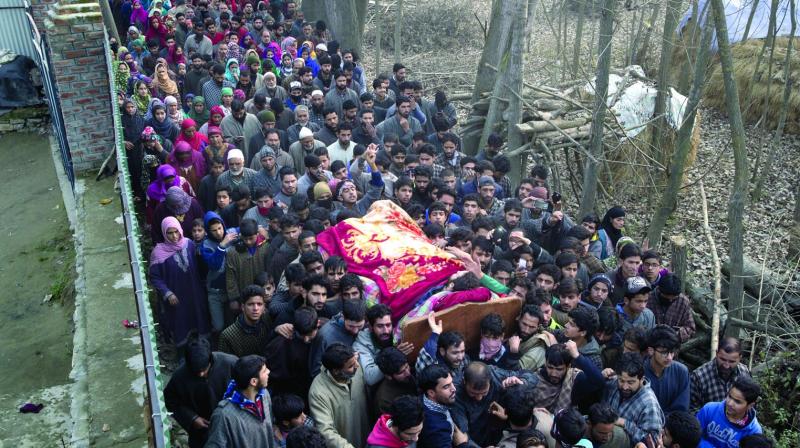 Villagers carry the body of a militant killed in an encouter with security forces in J&K’s Anantnag district on Friday. (Photo: AP)

SRINAGAR: A top commander of outlawed Lashkar-e-Tayyaba (LeT) allegedly involved in the murder of Rising Kashmir editor Shujaat Bukhari was among six militants killed Friday in a fierce gunfight with security forces in Ana-ntnag district of restive Jammu and Kashmir, the officials said.

Srinagar-based defence spokesman Col. Rajesh Kalia said that the exchange of fire between the security forces and militants began in the early hours in Shalgund village of Bijbehara area of the district. “Six terrorists were eliminated in the encounter and arms and ammunition were recovered from the spot,” he said.

The police officials identified one of the slain militants as top LeT commander Azad Ahmed Malik. They claimed that Malik was among the militants who killed veteran journalist and editor of Rising Kashmir Shujaat Bukhari outside his office in Srinagar’s Mushtaq Press Enclave on June 14 evening.

The J&K police had on June 28, two weeks after Bukhari was murdered, claimed that the conspiracy to kill him was hatched by LeT militants based in Pakistan and executed by its three cadres, including two locals and a Pakistani national, in Srinagar.

IGP (Kashmir range) S.P. Pani had told a press conference here that before targeting Bukhari, a “malicious” campaign was spearheaded against him by the LeT through social media from the neighbouring country.

Malik, who was killed on Friday, was a resident of Arwani village of Bijbehara and, per per the police statement, had been active as a LeT militant since December 2016, whereas Muzafar Ahmad Bhat alias Talha is from Sopat village of Qazigund area in the neighbouring Kulgam district.