India   All India  24 Dec 2018  India's longest railroad bridge, Bogibeel, to be inaugurated by PM Modi after 21 yrs
India, All India

India's longest railroad bridge, Bogibeel, to be inaugurated by PM Modi after 21 yrs

Opening of the bridge coincides with former PM Atal Bihari Vajpayee's birth anniversary under whose government work had started in 2002. 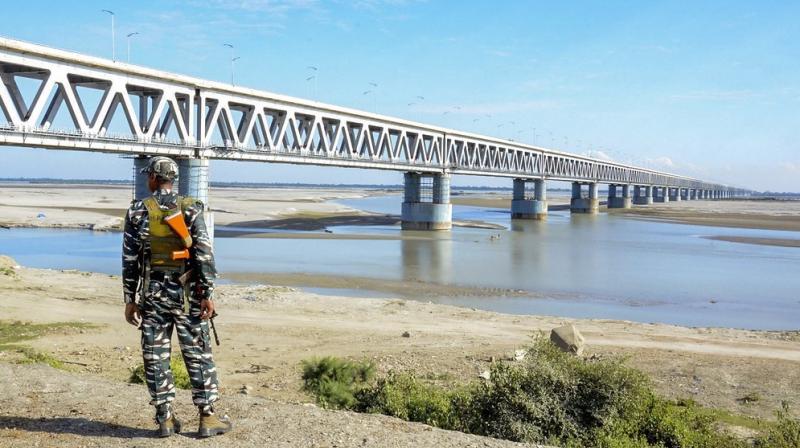 The bridge will be thrown open to the public on Tuesday which coincides with the birth anniversary of former prime minister Atal Bihari Vajpayee under whose government the work had started in 2002.

The state administration has made elaborate security arrangement with Northeast Frontier Railway running four trains to ferry people who are willing to be the part of inaugural ceremony of the bridge.

Constructed for Double Line Broad Gauge Track and three-lane road, this bridge will be the lifeline of the north eastern part of the country and will facilitate connectivity between north and south banks of river Brahmaputra in the eastern region of Assam and Arunachal Pradesh.

The biggest advantage of the bridge will be easy movement of troops from southern to northern bank. This means travelling to the farthest most point of India's border with China will be shortened by several hundred kilometres.

Informing that the bridge is also going to enhance the national security of the eastern region of India by facilitating swift movement of defence forces and their equipment up to China border, sources in the northeast frontier railway said, “Almost 75 per cent of the 4,000-km long border that India shares with China is in Arunachal Pradesh and the bridge will help in logistical support for Indian Army manning this border.”

Pointing out that the Government of India gave utmost importance to this Bridge Project by declaring it a National Project in the year 2007 thereby assuring availability of fund for speedy construction, sources in the N F Railway said. Bogibeel Bridge Project was also the part of Assam Accord and was sanctioned in the year 1997-98.

The foundation stone of the Project was laid by the then prime minister H D Deve Gowda on January 22, 1997. However, work on the project commenced during Atal Bihari Vajpayee’s regime on April 21, 2002.

The sanctioned estimated cost of the Project was Rs 3,230.02 crore. Revised estimate of the project amounts to Rs 4,857 crore which has been approved and sanctioned by the Railway Board to cover escalation and increased bridge length, the spokesperson of the NF railway said.

The remote districts of Anjaw, Changlang, Lohit, Lower Dibang Valley, Dibang Valley and Tirap of Arunachal Pradesh will be greatly benefited by this bridge.

The bridge will reduce the road distance from Dibrugarh, in Assam to Itanagar by 150 km and the railway travel distance between these two points will be reduced by 705 km.

Dibrugarh: Visuals from Bogibeel Bridge which will be inaugurated by Prime Minister Narendra Modi on December 25. #Assam pic.twitter.com/gmabH3Rr92