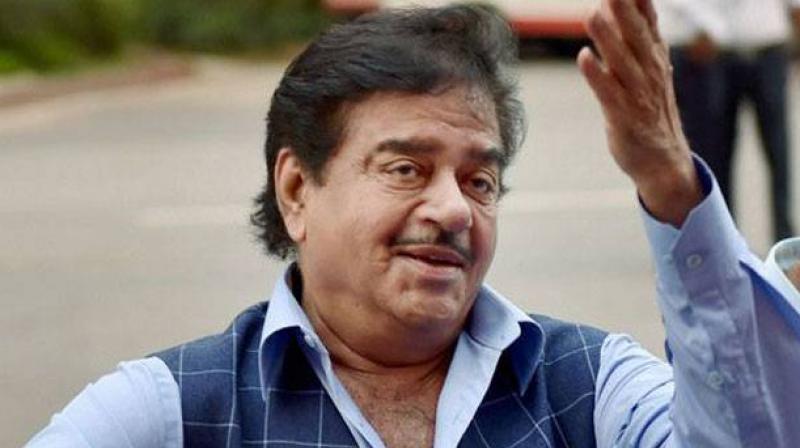 He was speaking here at the launch of the book 'The Paradoxical Prime Minister, Narendra Modi And His India', penned by Thiruvananthapuram MP and Congress leader Shashi Tharoor. (Photo: File)

"So, whatever I have said and done was in the national interest and certainly not in self interest. So far, I have never asked for any favour, or anything for me," the Bharatiya Janata Party (BJP) leader said.

He was speaking here at the launch of the book 'The Paradoxical Prime Minister, Narendra Modi And His India', penned by Thiruvananthapuram MP and Congress leader Shashi Tharoor.

The actor-turned-politician, who has often been critical of the various policies of the Narendra Modi-led NDA government, said people of the country needed jobs and better facilities instead of promises and jumlas (rhetoric).

"I am not just talking about Rs 15 lakh. I am not against him (Modi). I am personally against the one-man show and the two-men army. They are running the country. What kind of scene is this," Sinha added.

Sinha further said that some people had asked him that being an actor, why was he expressing his opinions on demonetisation, GST and other issues. "If a lawyer can talk on financial issues, without having any experience and knowledge, if a TV actress can become the HRD minister, and a tea-seller, though he never was one but thanks to media propaganda, can reach this height, then why can't I," he asked.

The former Union minister said he had enough experience in the film industry to speak about demonetisation in the national interest. Sinha said people can decide whether the prime minister was paradoxical or absurd after reading Tharoor's book.

Meanwhile, Tharoor invited Sinha to join the Congress saying there was "room for a hero" like him. He also lashed out at Modi and said that despite being an exceptional orator, the prime minister mysteriously goes silent every time a Dalit or a Muslim gets flogged. "He is the most eloquent prime minister in recent memory. But when a Dalit is flogged or a Dalit student commits suicide or a Muslim Air Force Havildar's father is beaten to death on false suspicion of having beef, this eloquent prime minister becomes mysteriously silent".

"This is one paradox. This book is full of paradoxes. You have somebody who says something and does the opposite," he added.

Tharoor also pointed to the report of Ministry of Home Affairs which said 97 per cent of incidents of communal violence related to cow protection since independence happened during this regime.

"Am not denigrating the prime minister through this book. You don't require 500 pages to do that. I have documented his career growth and analysed his four and half year growth in the book. This is a biographical profile of Modi," Tharoor said.

Leader of Opposition in the Kerala Assembly Ramesh Chennithala, former Chief Minister Oommen Chandy and other leaders also participated in the event.