Undeterred by protests, 2 women below 50 years start trek to Sabarimala

The women were earlier stopped at Appachimedu by protesters, who were later removed by police. 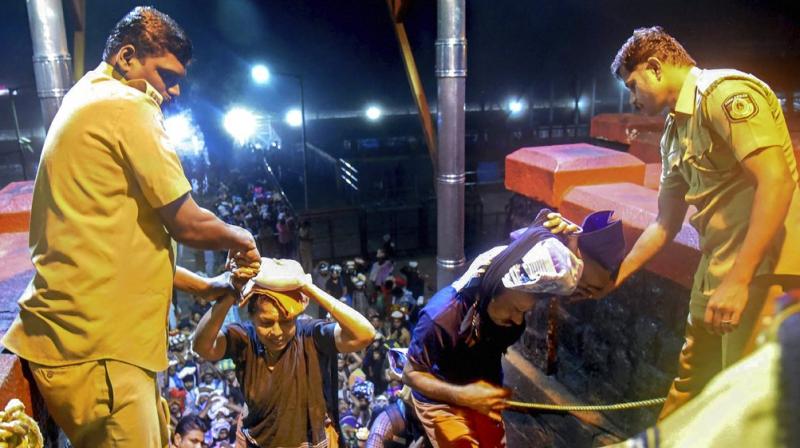 Bindu from Malappuram and Durga of Kozhikode are on their way to the hilltop shrine in Kerala under heavy police protection. (Representational Image | PTI)

Bindu from Malappuram and Durga of Kozhikode are on their way to the hilltop shrine in Kerala under heavy police protection.

"We are here to seek 'darshan' (offer prayers) of Lord Ayyappa. The Supreme Court order must be enforced and hope, police will provide us security," Bindu told media while on the way to Sabarimala.

On Sunday, the Sabarimala foothills had witnessed high drama as hundreds of devotees blocked paths and chased away a group of 11 women of menstruating age being escorted to the hill shrine by police.

Kerala had witnessed massive protests by devotees and the BJP opposing the apex court verdict of September 28 permitting women of all age groups into the shrine.

Thousands of devotees have gathered at the foothills of the shrine as the first phase of the annual pilgrimage season to Sabarimala comes to an end in the next three days.

Bindu and Durga, escorted by police, have reached Marakootam, about a kilometer from the Sannidhanam. They are waiting for more police personnel to accompany them.

The women were earlier stopped at Appachimedu, a place en route Sabarimala, by protesters, who were later removed by police.

The BJP has started protesting in front of the houses of these women against their attempt to trek the hill.

The bid of the 11 women, who were members of a Chennai-based women empowerment outfit, 'Manithi', to reach the shrine to offer prayers was unsuccessful on Sunday as they were forced to return by protesting devotees. The trek to Sabarimla starts from Pamba, which is around 4 kilometers from the hilltop shrine.

The first phase of the 41-day long annual pilgrim season at the Lord Ayyappa temple would culminate on December 27 with the puja. Over a dozen women, including a journalist and an activist of menstruating age, had also earlier tried to trek to the shrine, nestled in the Western Ghats forests, but could not make it due to protests by devotees and right-wing activists.

The Kerala High Court earlier this month had appointed a three-member committee, vesting them with powers to oversee law and order and other problems faced by pilgrims during the ongoing annual season.