He further said that if the party asks him to contest elections in the near future then he will surely fight. 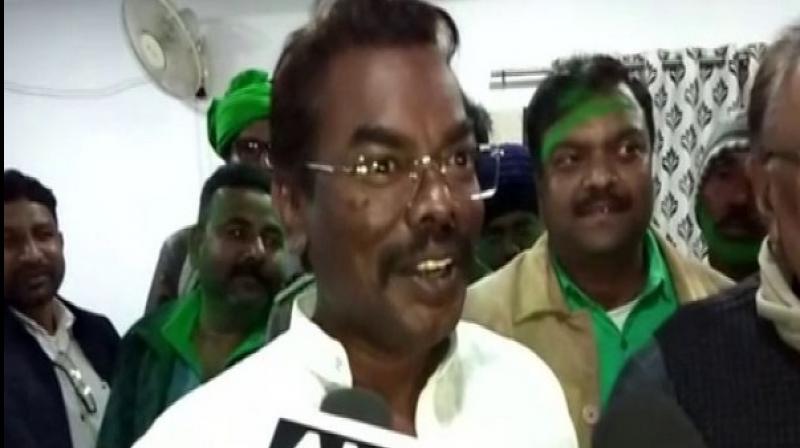 "As people's mandate is with us, we are forming government in 2-3 days," Basant told media reporters here. (Photo: ANI)

Dumka: After the outstanding victory of Jharkhand Mukti Morcha's Hemant Soren from Dumka and Barhait in the Jharkhand Assembly elections, his younger brother Basant Soren on Tuesday said that JMM-led alliance will form government in two-three days.

"As people's mandate is with us, we are forming government in 2-3 days," Basant told media reporters here.

On being asked if the government will be formed by the opposition alliance similar to Maharashtra, he said: "Maharashtra scenario was completely different from here."

Lambasting at the former BJP government led by Raghubar Das in the state, he said: "People had decided what they have thought. Citizens had decided to remove the corrupted and arrogant government. They (BJP) do development by just saying and promising and we bring development by working on the ground."

He further said that if the party asks him to contest elections in the near future then he will surely fight.

"Basant Soren is here with you all....with the public. In the future, if leadership wants me to contest the election then I will surely fight," Basant replied on being asked about his further role in the party.

The probable chief minister candidate from the Congress-JMM-RJD alliance has defeated BJP's Simon Malto from the Barhait seat while on the Dumka seat he once again defeated BJP's incumbent candidate Lois Marandi.

JMM-led alliance, which includes Congress and RJD, on Monday won an absolute majority in the Jharkhand elections by winning 47 seats in 81-member assembly. The alliance defeated the BJP which won 25 seats.

Here is the final party tally declared by the Election Commission.