India   All India  24 Dec 2019  Migratory birds are at risk in Rajasthan: Time to act now
India, All India

Migratory birds are at risk in Rajasthan: Time to act now

The specialty of the Thar desert climate is that from centuries there are migratory birds of many species and indigenous birds. 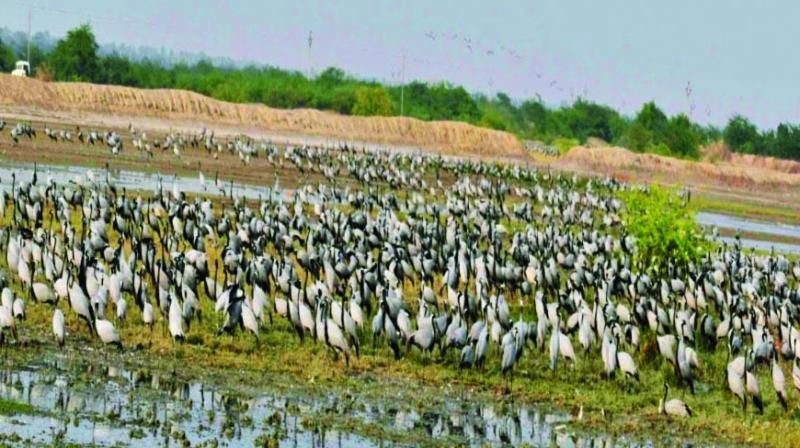 Migratory birds are arriving in many areas of the country — it is the regular seasonal movement. Their migration from one place to another is not limited to food only, but the entire ecosystem is connected to it.

Migratory birds are arriving in many areas of the country — it is the regular seasonal movement. Their migration from one place to another is not limited to food only, but the entire ecosystem is connected to it. This plays an important role in balancing the environment. While migration of these birds is life-giving for human civilisation, society also gets its benefits financially. Migratory birds of different species settle in different parts of the country. This is their regular destination during migration from generation to generation.

Flocks of birds migrate from various places of the world to many areas around Rajasthan’s Pachpadra town of Barmer district, once known for salt production, and it is again emerging with a new identity on the map of the country after the establishment and commencement of construction work on the refinery. But the potential aspirations of employment and revenue from the refinery never allowed another entity to emerge here. Thousands of kurjans (Demoiselle cranes) — they are mainly found in central Eurasia — and other migratory birds come here every year. Thousands of birds have come this year to the banks of a sprawling salt lake.

The specialty of the Thar desert climate is that from centuries there are migratory birds of many species and indigenous birds. This plays an important role in maintaining the biodiversity here. They camp in the banks of Tal Chhapar in Churu district, Lunkaransar in Bikaner district, Gajner Jheel, Kheichan and Bap Thana area of Phalodi in Jodhpur district, Pachpadra, Tirsingdi, Korana, Navai villages of Barmer and the ponds of Jaisalmer. The traditional water sources in the desert, the safe, serene environment and the attachment of the people towards the fauna have been the reason for the attraction of these birds. The people of Thar, especially women, have had a friend-like relationship with the kurjan bird. And this relationship of women and kurjan birds is prevalent in the folk songs of Rajasthan.

Crossing the natural and political boundaries of the countries, birds of kurjans and other species travel thousands of kilometers from the cold regions of southeastern Europe, Siberia, northern Russia, Ukraine and Kazakhstan and come to the Thar desert and when the temperature starts rising then they go back together. During the monsoon in the desert, ponds and lakes are filled with water, coolness increases as crops are harvested and with this the arrival of migratory birds starts. Favourable temperatures, water-filled ponds, lakes, green oranges and pastures such as gauchar and chugga scattered in the fields after harvest have been the reasons for these birds being attracted.

But now the situation in the Thar desert is also changing rapidly. Reasons such as the high speed of development, development of energy, communication and transport modes, interference in the lifestyle of the market, mining of nature, environmental values and isolation of the established industries and human isolation from nature are changing the Thar desert. Due to reasons such as lack of vegetation of pastures and the waste of traditional water sources, the day is not far when the arrival of these birds will stop completely. Birds that live in harmony with nature are susceptible to and quickly detect unfavourable conditions of life. This is why kurjans and other migratory birds are rapidly changing their hideouts in the desert.

If we talk about recent incidents, thousands of native and migratory birds died at Tal Chhapar. It’s a warning to both the government and society that the rest of the bird’s hideout should also be repaired. Industry and the population will grow rapidly as a refinery is built at Pachpadra. Till recently, the contenders for the land were standing in the deserted salt lake. Illegal possession has started taking place. The operation of the refinery will pollute the atmosphere. It is not a difficult task to obtain a certificate from the pollution control authority acknowledging the presence of the birds. The residence of the birds has been filled with waste materials and dirt coming out of Pachpadra town. A whole bunch of kurjans are camping on dirt piles. During the day they stay at the water’s edge, and then they take shelter in the bushes of luxuriant buds that grow in the lake at night.

After the Tal Chhapar incident, the government is repeatedly claiming that they are serious on this issue. If this seriousness is limited only to the investigation of the deaths of thousands of birds killed in Taal Chhapar, then it should be a matter of concern for environmentalists and animal lovers. It would have been better to learn a lesson from the Tal Chhapar incident and take stock of all the migratory birds’ locations in the Thar desert, with instructions to the concerned departments to conserve and protect these targets, with the participation of the community and the gram panchayat to protect them, to create plans for the development of traditional water sources and pastures. Society should also come forward to protect them after learning from the people of Corna village. Two years back, people fought unitedly and won in Barmer district, where thousands of kurjans and other birds come, in protest against the government’s decision to build Grid Substation. The village panchayat and community made arrangements for the safety and protection of kurjans and other birds in Kheechan. In the same way, both the government and society should take initiative to preserve and protect other desert locations. If we will not be serious over this issue, then human civilisation should be ready to suffer serious consequences in the future.