The decision comes in the wake of Tamil Nadu Assembly passing a law legalising the famous bull-taming sport Jallikattu. 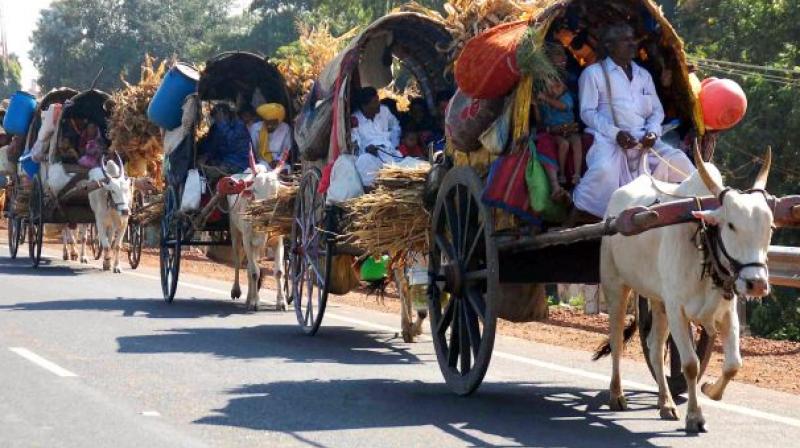 Mumbai: Amid growing demands that the ban on bullock cart races in Maharashtra be lifted, the state government has decided to seek a legal opinion over the issue.

The decision comes in the wake of Tamil Nadu Assembly passing a law legalising the famous bull-taming sport Jallikattu.

Mahadev Jankar, Maharashtra Minister for Animal Husbandry, while speaking to reporters on Tuesday said the government is positive about lifting the ban on bullock cart races and will respect the public sentiments.

"Maharashtra government is positive about it (lifting of ban on bullock cart races) and we will respect public opinion. I feel the bullock cart races should resume. But as a minister, following the Supreme Court orders is my foremost duty. I will soon speak to the Chief Minister and will also seek opinion from law and judiciary on how do we go about it," Jankar said.

Shivajirao Adhalrao Patil, who is the Shiv Sena MP from Shirur Lok Sabha constituency, had recently said Chief Minister Devendra Fadnavis should approach the Prime Minister and seek a central ordinance to lift the ban on bullock cart racing in the state.

Shetkari Sanghatana, a farmers' organisation in Maharashtra, also demanded lifting of the ban on bullock cart racing and threatened to launch a state-wide agitation over the issue.

Stating that the ban was not right, Jankar added that he is personally in favour of races as he hails from a farmer's family.

"I am a farmer's son, I know how to take care of the livestock. In fact, immediately after becoming a minister I had appointed a lawyer in this case (challenging the ban). We have deputed the best of lawyers," Jankar said.

The Animal Husbandry department has appointed noted legal experts Fali Nariman and P P Rao to represent the state in the Apex court challenging the ban.

Jankar added that his department is also planning to tour Tamil Nadu to understand the intricacies of passing the law on legalising jallikattu in the state.