Thanking the leaders for their presence, PM said 'their collective presence in India has touched hearts of my 1.25 billion fellow Indians'. 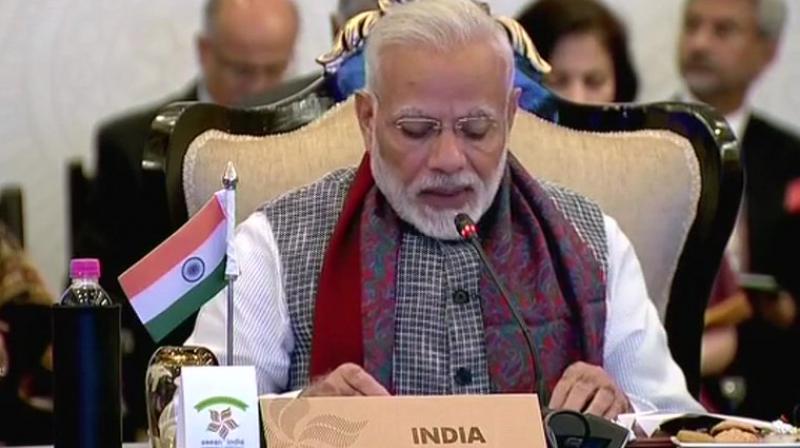 The Prime Minister said India was committed to work with the with the ASEAN nations to enhance collaboration in the maritime domain.  (Photo: ANI | Twitter)

The PM said it was India's privilege to host the 10 top leaders, who will be the honorable guests of the 69th Republic Day celebrations.

Modi said, the partnership which has evolved since 1992 has been successful in implementing the objective of ASEAN-India partisanship for peace, progress and shared prosperity through five year plan of action.

Thanking the leaders for their presence, Modi said "their collective presence in India has touched hearts of my 1.25 billion fellow Indians".

The Prime Minister said India was committed to work with the with the ASEAN nations to enhance collaboration in the maritime domain.

"Maritime security cooperation has been our major focus during discussions," PM said.

"Freedom of navigation will be a key focus of India- ASEAN in the maritime domain," he added.

"India shares the ASEAN vision for rule based societies and values of peace," he said while addressing the plenary session of India-ASEAN summit.

The highest-level of participation at the summit comes in the backdrop of increasing Chinese economic and military assertiveness in the region.

The event will mark 25 years of India's ties with the Southeast Asian bloc.

The Republic Day parade on Friday will witness a record setting presence of ASEAN leaders. This comes at a time when India is keen on changing its 'Look East' policy to 'Act East' policy.

Modi earlier on Thursday, held bilateral talks with his counterpart from Thailand Gen Prayut Chan-o-cha on strengthening cooperation in strategic areas of trade, defence and security.

China on Thursday reacted guardedly to India hosting the ASEAN leaders on the country's 69th Republic Day and hoped that it will help maintain peace, stability and the development of the region.