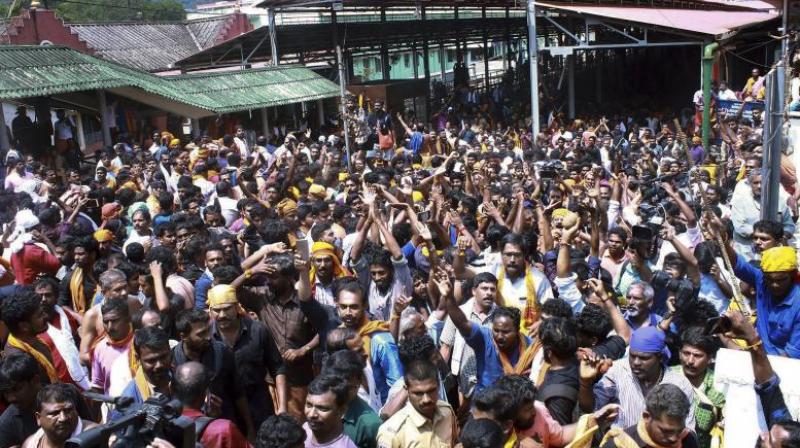 Various events that had taken place in connection with the Sabarimala issue underlined the urgent need to carry forward the renaissance movement, the Governor said while detailing steps taken by the state government to ensure gender equality. (Photo: File)

Thiruvananthapuram: As the controversy over the Sabarimala women entry issue simmers in the state, Kerala Governor Justice P Sathasivam on Friday said the CPI(M)-led LDF government is "duty-bound" to implement the apex court verdict permitting women of all age groups into the

In his customary policy address marking the beginning of the 14th session of the Assembly here, he said the state government had stood for gender equality, social justice and the dignity of toiling masses.

Various events that had taken place in connection with the Sabarimala issue underlined the urgent need to carry forward the renaissance movement, the Governor said while detailing steps taken by the state government to ensure gender equality. For this, the Pinarayi Vijayan-led government extended support to mobilise a "Vanitha Mathil" (Women's Wall) across the state as a symbol of united will of the state's women in their struggle for gender justice, he said.

"My government will ensure gender justice. The Supreme Court ordered that preventing the entry of women of a particular age group to Sabarimala temple is unconstitutional. My government is duty-bound to implement the judgement and uphold our constitution," Sathasivam said.

Though the opposition UDF members raised their voice when he mentioned that over 50 lakh women gathered as part of the women's wall on January 1, the Governor went ahead with his address.

In his 90 minute-long address, Sathasivam also said the state government has proposed to set up a "Navodhana Museum" to commemorate the historic contributions of social reformers of the southern state.

Though the LDF government had maintained that the "Women's Wall" was against any attempt to push society back to the dark ages from its progressive values, the opposition UDF and BJP had said that it would create a "communal divide" among the people. They had also alleged the government was misusing its machinery and welfare funds for the programme.