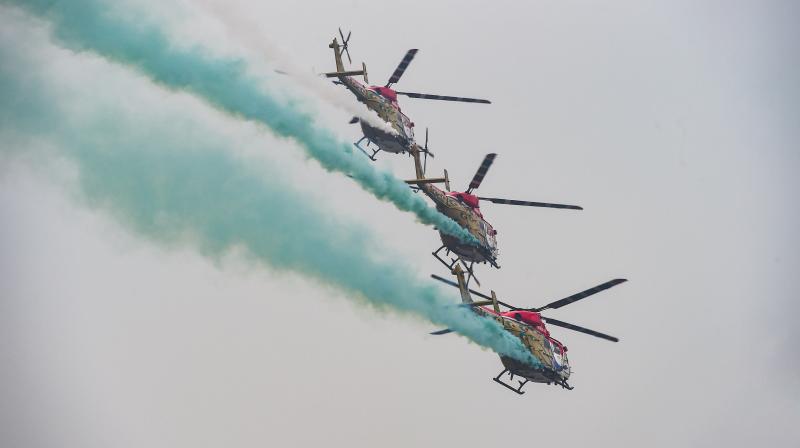 Indian Air Force choppers fly in a formation during the full dress rehearsal of the Republic Day Parade 2022, at Rajpath, in New Delhi. (Photo: PTI)

New Delhi: A grand fly-past of 75 aircraft of the Indian Air Force, cultural performances by 480 dancers selected through competitive process, display of 10 scrolls each of 75 metres length and installation of 10 large LED screens will be happening for the first time at the Republic Day parade on Wednesday, the Ministry of Defence said.

The Republic Day parade (RDP)-2022 is happening in the 75th year of Indian independence, which is being celebrated as 'Azadi ka Amrit Mahotsav' across the country, the MoD's statement on Tuesday noted.

"The grand finale and the most keenly awaited segment of the parade, the fly-past, will for the first time witness 75 aircraft of the IAF displaying a number of formations, as part of 'Azadi ka Amrit Mahotsav'," it mentioned.

For the first time, the IAF has coordinated with Doordarshan to show cockpit videos during the fly past, it noted.

Ten scrolls each of 75 metres in length and 15 feet in height will be displayed along the Rajpath during the parade for the first time, it mentioned.

"They (scrolls) were prepared during the 'Kala Kumbh' event jointly organised by Ministries of Defence and Culture," it noted.

The scrolls were painted in two phases - at Bhubaneswar and Chandigarh - by over 600 renowned artists and young aspirants from across the country, it mentioned.

For the first time, dancers who perform during the cultural programme at the parade have been selected through a nation-wide competition, the MoD noted.

The competition 'Vande Bharatam' began at the district level with the participation of nearly 3,870 dancers in 323 groups progressed to state and zonal levels over a period of two months in November and December, it mentioned.

"Finally, 480 dancers were selected. They will showcase their talent during the parade at Rajpath," it stated.

For a better viewing experience at the parade, 10 large LED screens - five on each side of Rajpath  will be installed, the MoD mentioned.

"Curated films combining footages of previous Republic Day parades, short films on the armed forces and stories related to various events in the run-up to the RDP-2022 will be screened before the parade," it noted.

Thereafter, the screens will show the live event, it mentioned.