A protester was killed and two others were critically wounded in the police firing on Saturday night. 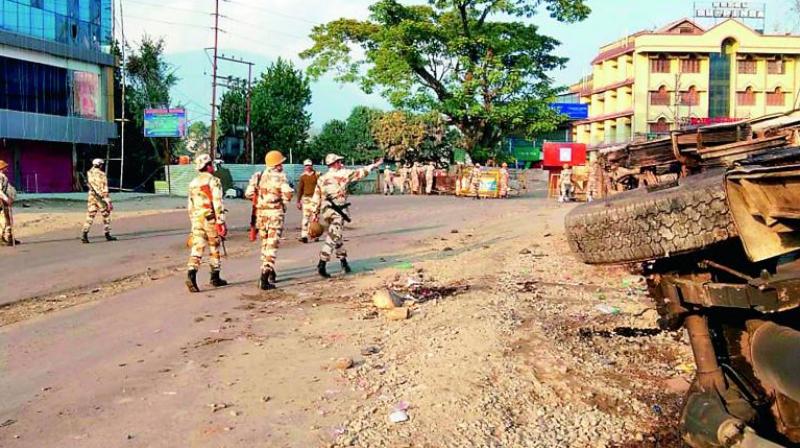 Security personnel patrol a street during a protest in Itanagar, Sunday (Photo: AP)

Guwahati: Despite a clarification issued by Arunachal Pradesh chief minister Pema Khandu that his government was not going to give Permanent Residence Certificates (PRC) to six non-Arunachalee communities, violence continues to rock the state capital Itanagar where hundreds of protesters set the house of deputy chief minister Chowna Mein on fire and clashed with the security forces in their attempt to attack the residence of the chief minister on Sunday.

The protesters, who went on rampage all over the state capital throughout the night, also set a police station on fire, forcing the state administration to call out the Army and impose prohibitory orders. A protester was killed and two others were critically wounded in the police firing on Saturday night.

Security sources said that the security forces on Sunday opened fire on protesters who were trying to attack the chief minister’s bungalow and shot dead at least three protesters. Senior police officers could not be contacted to confirm the death of three protesters.

Arunachal Pradesh Congress president Takam Sanjay on Sunday demanded the imposition of President’s Rule in the state and blamed Union minister of state for home Kiren Rijiju, chief minister Pema Khandu and his ministers for the current situation in the state.

Mr Sanjay, who was in New Delhi, told this newspaper that the BJP was trying to turn Arunachal Pradesh into another Kashmir. He said: “For the last four years they did nothing for the PRC, but now at the fag end of its tenure, they are trying to give PRC hurriedly. Like all other northeastern states, Arunachal was also passing through a political turmoil on the issue of the Citizenship Amendment Bill and the sudden move of the government to grant PRC had hurt the sentiments of the people.” Admitting it has been a long-pending issue of the state, Mr Sanjay said: “The BJP was trying to destroy the harmony of tribals and non-tribals that existed in the state by such divisive moves.” He also regretted that all BJP ministers had fled the state capital instead of dousing the fires. “The day the protests started, the state leaders had an opportunity to talk to protesters at the state Assembly premises, where the protesters had gathered first, but instead of engaging with them, they resorted to suppressing the agitation, provoking the sentiments of the people,” said Mr Sanjay, outright rejecting all charges by the ruling party about his involvement. He also appealed to the protesters to maintain peace and demanded a judicial probe to fix responsibility.

Informing that even the Army had not succeeded in defusing the situation, security sources at Itanagar said that provocative posts on the social media were adding fuel to the violence as the protesters tried to attack the residence of chief minister Pema Khandu on Sunday. However, heavy deployment of security forces had succeeded in defusing the situation. The authorities have snapped all Internet services.

The protest broke out after a Joint High Power Committee submitted a recommendation to the government recommending Permanent Resident Certificates (PRC) to the non-Arunachal Pradesh Scheduled Tribe (Non-APSTs) communities of Namsai and Changlang districts.

Mr Mein, along with Mr Khandu, had sought the granting of PRC to these communities as they dominate Namsai and Changlang districts. Mr Mein represents Lekang Assembly constituency in Namsai district.

The most surprising aspect of the ongoing violence is that the state administration was yet to ascertain the identity of the group or individuals who are leading the violent protests in Itanagar. If insiders in Itanagar are to be believed, there have been a few unknown WhatsApp groups which had been sending message to the protesters to gather at specific places whenever they strike.

Even after repeated attempts, neither Arunachal Pradesh BJP president Tapir Gao nor any minister of the government could be contacted for their reaction. Even the chief secretary and the head of the home department were not picking up the phones. Security sources said most ministers, fearing a backlash, had left the state capital.