India   All India  25 Feb 2020  Wendy Jehlen of Anikaya brings together some very skilled and powerful dancers
India, All India

The metaphor of people in migration, including refugees, mirrors our journeys as humanity creating communities over eons. 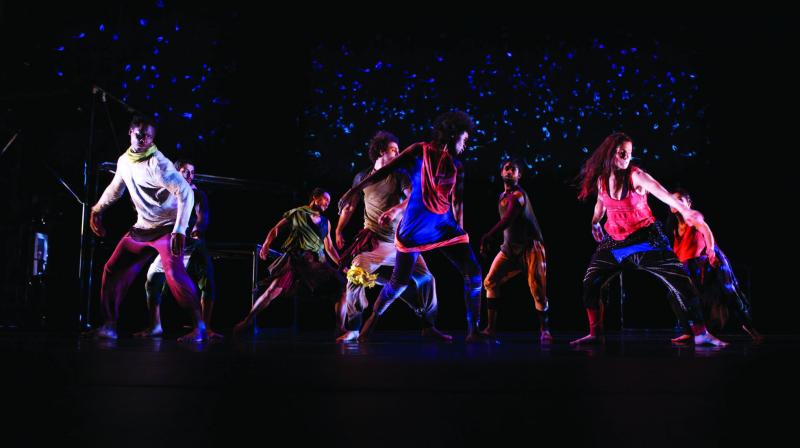 Conference of the Birds, presented by Wendy Jehlen’s Anikaya dance company during the NSD’s 21st International Theatre Festival, is a experience we all hope for when we enter a theatre, one that takes us on an emotional and visceral journey that can shift the imprints in our core.

Conference of the Birds, presented by Wendy Jehlen’s Anikaya dance company during the NSD’s 21st International Theatre Festival, is a experience we all hope for when we enter a theatre, one that takes us on an emotional and visceral journey that can shift the imprints in our core.

It’s difficult to know where to being in talking about this remarkably moving production, created by a team of artistes from 10 countries and five continents. We are mesmerised by a diverse group of dancers exploring answers to the question: How can we be different together? The answer is framed in the fluid context of Farid ud Din Attar’s epic Sufiana poem of a group of birds in search of the mythical Simurgh bird; some giving up, others reflected and becoming the Simurgh.

The metaphor of people in migration, including refugees, mirrors our journeys as humanity creating communities over eons. In the process of creation, the entire company as well as director engaged with these communities in an artiste-led process.

The company’s name Anikaya means grace/gift of the body combining Hebrew (ann: gift), Persian (i-a: of) and Sanskrit (kaya: body). Delhi’s movement theatre work brought together dancers from Egypt, Turkey, South African Indians, Japan, Indonesia, Brazil and the US. The movement language of these varied bodies sensitively mingled and refracted to flying through the space, elevations and each other to touch on issues of religious and cultural minorities, gender and sexuality, refugees and xenophobia.

Dancer/director Wendy Jehlen is no stranger to Delhi, or India for that matter. Her studies of various Indian performance traditions and research comparing abhinaya and sign language, women on stage in India and the US and projects including on the Rani of Jhansi have been supported by USIEF Fulbright programs, the American Institute of Indian Studies, the National School of Drama, ICCR, Chennai Alliance Francaise. She’s performed and given workshops from Delhi to Kalakshetra, Trissur, Bengaluru and Pondicherry to Roorki, and of course equally internationally.

Each member of Wendy’s ensemble brings an amazing background that informs of the richness of their collaborative work. Brazilian Luciane Ramos Silva is a dancer, choreographer, anthropologist and cultural organiser with a doctorate in performing arts/dance researching the notions of coloniality in dance. She initiated and developed movement and training focusing on blackness and the body in African and African diasporic communities. Her solo “Eyes at my back and a smile at the corner of my lips” was presented in North Carolina and Sao Francisco and she is the artistic director of the São Paulo-based performance group Diaspóros Coletivo das Artes.

Egyptian Ibrahim Abd El Hamid Ibrahim Ahmed is a director, choreographer and dancer who began acting and dancing while earning his BA in Philosophy from Cairo University. He joined the first interdisciplinary music theatre group in Cairo and concurrently began his own movement research on the flow of the movement in the body from a contemporary point of view of Sufi whirling and incorporating the concept of free fall. He conducted residencies at Alanus University, Germany to learn more about the concept of the flow as understood in the Eurythmie studies. Recently he has started to reflect more on his home cultures as Egyptian, African, Middle Eastern and the Mediterranean resulting in the world premiere of “Green Leaves are Gone”, a work choreographed in collaboration between Egyptian and Italian choreographers at the Inteatre Festival.

All the dancers are highly skilled and powerful dancers, none more so than the petite Kae Ishimoto from Japan. She was born into a family of traditional Japanese dancers, studied jazz dance at age four, and onward in modern and contemporary dance performing with many international artistes. She was introduced to Butoh by great masters and has been invited to 19 countries in Asia, Europe and the US as a Butoh artiste. Her solo Butoh dance “Transformation Girl” using the Hijikata method of Butoh, was seen in seven countries in Asia and Europe. She has worked to construct an original, genre-less expression that synthesises various elements and traditions of dance and organised intensive workshops and events in 12 countries including Japan, UK, Hong Kong, Bali and Mexico City.

Most dance companies have a relatively homogeneous background but the diversity of the Anikaya group demands a spotlight on each. Born in Solo, Indonesia, Danang Pamungkas studied traditional Javanese dance at the Mangkunegaran Palace of Surakarta, and graduated from the Indonesian Institute of the Arts in Surakarta. He was a member of the renowned Cloud Gate Dance Company of Taiwan for several years. Danang’s own choreography was awarded first prize at the Next Wave Indonesian Choreographer in Jakarta, and he performed at major festivals across Indonesia, Austria, Singapore as well as during a six-month residency program in New City and a six-week summer program at American Dance Festival, Durham with a grant from the Asian Cultural Council.

Sarveshan Gangen is recognisable to Indian dance cognizati as he is a Bharatanatyam artiste from Cape Town (South Africa), currently based in Chennai. He started at three under the guidance of Savitri Naidoo (disciple of Indira Rajan) at the Vadhini Indian Arts Academy in Cape Town and, post Arangetram under Sandya Murali (disciple of the Dhanajayans), he moved to Chennai to train with the Dhananjayans as well as Karaikudi Subramanian, Leela Samson and others. Sarveshan is recognised as a nuanced performer, a thought-provoking teacher and an innovative choreographer who has given scores of performances in leading theatres in South Africa, India and abroad.

Turkish contemporary dancer Yasin Anar is not only a graduate of Mimar Sinan Fine Arts University State Conservatory in contemporary dance but also holds a certificate as a Master Trainer in Turkish traditional folk dance. He has danced with a number of contemporary dance companies in Turkey and abroad including the UK-based Aakash Odedra Dance Company.

Just as the dancers create a community through movement, the collaborating multi-dimensional artistes of the music, projections, graphics have amazing stories that would far exceed my space and perhaps your time to read. Violinist and composer Shaw Pong Liu is from the US, Fraction (Eric Raynaud) is a French music composer and digital art creative designer living in Paris, composer Shahou Andalibi from Iran/Canada learned/performed Persian classical singing and Maqam music from the age of four under his father, Iraj Andalibi a well-known Persian musician. Projection artiste and Lighting designer David Bengali is based in New York while Iranian-American graphic designer and content consultant Pouya Jahanshahi is an assistant professor at Oklahoma State University.

Anikaya’s Conference of the Birds is as difficult to translate into words as it is difficult to capture a breathtaking panorama of nature with a simple camera. That is as it should be. The dance communicates in its own language through bodies that connect us to hearing the whispers of our own, through theirs. The intensity, the gentleness widens our personal visceral knowledge through the honesty and wisdom of the choreography. If one allows oneself to be drawn in, and it is hard not to — it is like a meditation of awareness of the shared breath of humanity.

Sharon Lowen is a respected exponent of Odissi, Manipuri and Mayurbhanj and Seraikella Chau whose four-decade career in India was preceded by 17 years of modern dance and ballet in the US and an MA in dance from the University of Michigan. She can be  contacted at sharonlowen.workshop@gmail.com