The court also slapped a fine of Rs 60 lakh on him during a hearing conducted through video-conferencing as Lalu Yadav was in hospital. 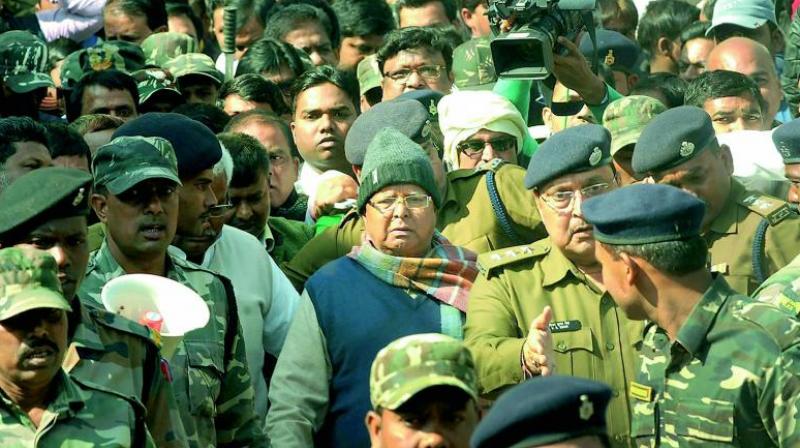 Lalu Yadav, who has been in Birsa Munda Jail in Ranchi since December 23, 2017, after his conviction in two similar cases, will have to serve the two seven-year jail terms one after the other. (Photo: PTI/File)

Ranchi: Former Bihar chief minister and RJD chief Lalu Prasad Yadav was on Saturday sentenced to 14 years of imprisonment in the fourth fodder scam case linked to illegal withdrawal of Rs 3.31 crore government funds from the Dumka treasury by animal husbandry department officials between 1991 and 1996.

The Rs 950 crore fodder scam involved embezzlement of treasury funds to non-existent companies to supply cattle fodder in Bihar in mid-1990s, when Lalu Yadav was the chief minister. The first case against Lalu Yadav in the scam was filed by the CBI in 1996.

CBI judge Shiv Pal Singh in Ranchi on Saturday awarded two separate sentences of seven years each to Lalu Yadav under the Indian Penal Code (IPC) and the Prevention of Corruption Acts in the Dumka case, making it the longest jail sentence yet given to him in the fodder scam cases.

Lalu Yadav, who has been in Birsa Munda Jail in Ranchi since December 23, 2017, after his conviction in two similar cases, will have to serve the two seven-year jail terms one after the other. The court also slapped a fine of Rs 60 lakh on him during a hearing conducted through video-conferencing as Lalu Yadav was in hospital.

For default or non-payment of fine, the RJD chief will have to spend one more year in prison for each of the two sets of sections under which he was convicted.

Soon after the court decision, Lalu Yadav’s younger son and Leader of the Opposition in the Bihar Assembly Tejashwi Yadav said, “We apprehend a threat to Laluji’s life as he has been challenging the BJP’s hegemony and trying to unite the parties opposed to it across the country. He is innocent and he will get justice in the higher courts. The people of Bihar will give a befitting reply to those behind the conspiracy against the RJD supremo.”

Deputy chief minister Sushil Kumar Modi dismissed dismissed Tejashwi Yadav’s allegation that there was a threat to his father’s life and pointed out that the RJD supremo enjoyed a foolproof security in jail.

Union minister Giriraj Singh told reporters, “As one sows so one reaps. This is the law of nature and it is futile to make a fuss over today’s verdict. The RJD workers should remember that the BJP was not in power when the fodder scam cases were lodged.” 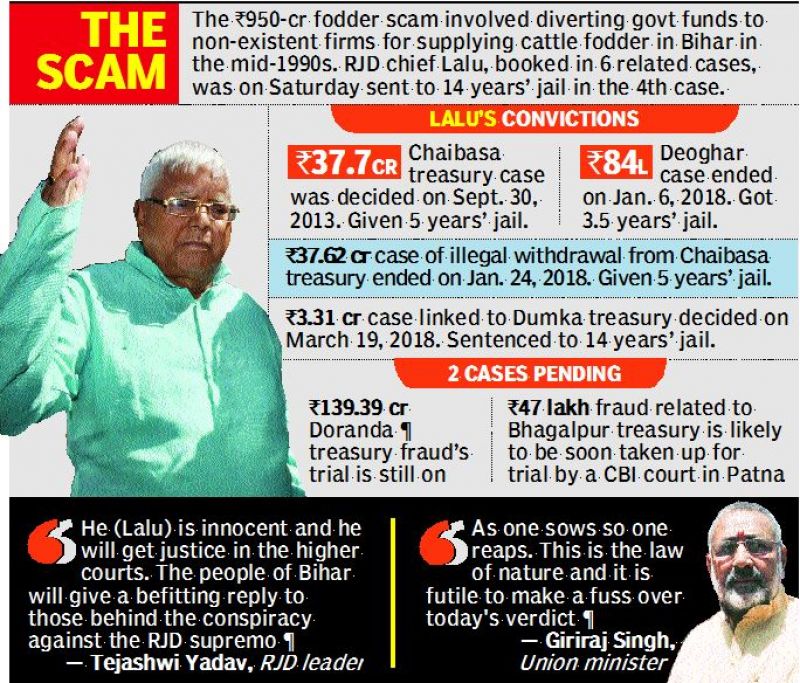 The court had on March 19 held the 69-year-old RJD chief guilty along with 18 others in connection with the Dumka treasury case. Lalu Yadav was convicted under penal provisions for cheating, criminal breach of trust, forgery and criminal conspiracy.

Former Bihar chief minister Jagannath Mishra, however, was acquitted in the case, along with 12 other accused..

Lalu Yadav is currently undergoing treatment at the Rajendra Institute  of Medical Sciences (RIMS) in Ranchi, where he was admitted last week after he complained of chest pain and discomfort in jail.

There were a total of 47 accused in the Dumka treasury case. Fourteen of them had died during the course of the trial while two had turned approvers. Of the remaining 31 accused 19 were convicted earlier this month. The Saturday’s verdict has come as big jolt for Lalu Yadav and his family as they were hoping for less punishment due to his poor health.

Legal experts say that trouble for Lalu Yadav may not end soon as he may have to move Supreme Court for bail. Lalu Yadav, who has so far been convicted in four cases, is facing trial in two more cases related to fodder scam.

The fifth case relating to fraudulent withdrawal of Rs 139.39 crore from Doranda treasury is still pending with the court. Five fodder scam cases were shifted to Jharkhand after the separation of the state in 2001 while the trial in one case related to Bhagalpur treasury is going on in Patna’s CBI court.

The fodder scam had surfaced in 1996 and a charge sheet against 38 persons was filed by the CBI on October 27, 1997. Lalu Yadav was made one of main accused in the case.