India   All India  25 Mar 2018  Ready to get naked before white man for visa: Union min on Aadhaar row
India, All India

Ready to get naked before white man for visa: Union min on Aadhaar row

KJ Alphons assured that bio-metric data was with the UIDAI and that it has not been breached. 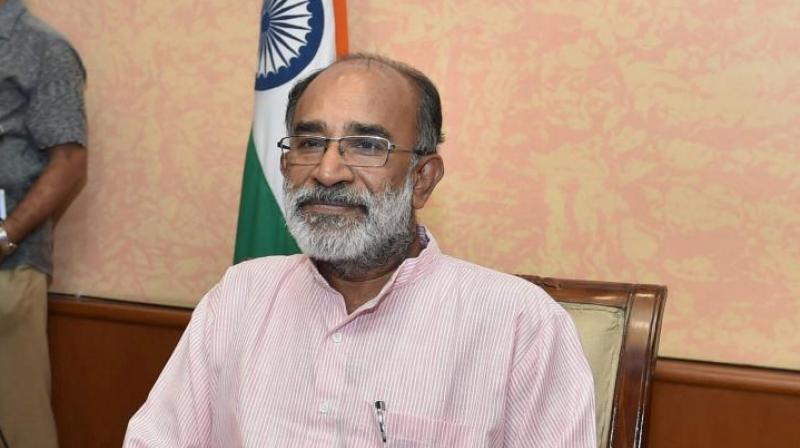 New Delhi: Lashing out at Aadhaar critics who claim intrusion into privacy, Union Minister KJ Alphons on Friday drew a bizarre analogy saying that people have no problem in giving their fingerprints and getting their bodies naked before "white man" for obtaining visas.

He said people have issues only when "the Government asks for details".

"I filled up to 10 pages for US Visa form. We have absolutely no problem giving our fingerprints and getting body naked before the white man at all. When your own government asks for your name and address there is a massive revolution saying it's intrusion in privacy," Alphons said.

The minister's statement comes on the heel of activists increasingly challenging Aadhaar scheme. Alphons had made a similar statement last year as well.

Following criticism over his comment, Alphons on Sunday assured that the Aadhaar has only the name and address of the individual, adding that bio-metric data was with the UIDAI and that it has not been breached.

"We have given authorisation to government agencies to access Aadhaar information," he said.

"You think Prime Minister is going to give your data to a private company! Don't believe such fake stories," Union Minister of State for Electronics and Information Technology said.

Earlier in the week, ZDNet, a technology news portal cited a security researcher’s claim to state that a system of state-owned utility firm was allegedly leaking information on Aadhaar holders.

The reports were, however, refuted by the Unique Identification Authority of India (UIDAI) which asserted that there has been “absolutely no breach” of its database.

It termed the data breach claims as “totally baseless, false and irresponsible”.

The report of the alleged security lapse comes at a time when the Supreme Court is hearing a clutch of petitions challenging the Aadhaar Act and the use of biometric identifier in various government and non-government services.

Earlier on Thursday, the UIDAI had conveyed to the apex court that Aadhaar data was encrypted and secured in the depository, which was not connected with Internet, and that there was no possibility of leakage or security breach.

Dispelling doubts on leakage, UIDAI CEO Dr Ajay Bhushan Pandey said all biometrics data are encrypted with 2048 bit encryption and it will require more than the age of universe to break the one encrypted key.

Attorney General KK Venugopal while defending the Aadhaar scheme had said that data was stored behind 13 feet high and 5 feet wide walls in servers maintained by the Central Identities Data Repository (CIDR).

Senior counsel Kapil Sibal, appearing for one of the petitioners had earlier in February told the Supreme Court that Aadhaar law violates fundamental right to privacy of an individual.

Sibal had said that no technology was safe and moreover, no assurance can be given that personal data of citizens would remain safe in digital space.

The Supreme Court has extended until further orders the deadline for Aadhaar linkage with bank accounts and all schemes of the Ministries/Departments of the Central and State governments, except for availing benefits and subsidies.

As a result of this order, Aadhaar is not mandatory for various other services. The earlier time limit was up to March 31.