India   All India  25 Mar 2018  Price of a wink: Vadodara police tweets against unsafe driving, other menaces
India, All India

Price of a wink: Vadodara police tweets against unsafe driving, other menaces

The Vadodara Police Commissioner said, it was a deliberate choice to use clever puns from pop culture, Bollywood to bring the message home. 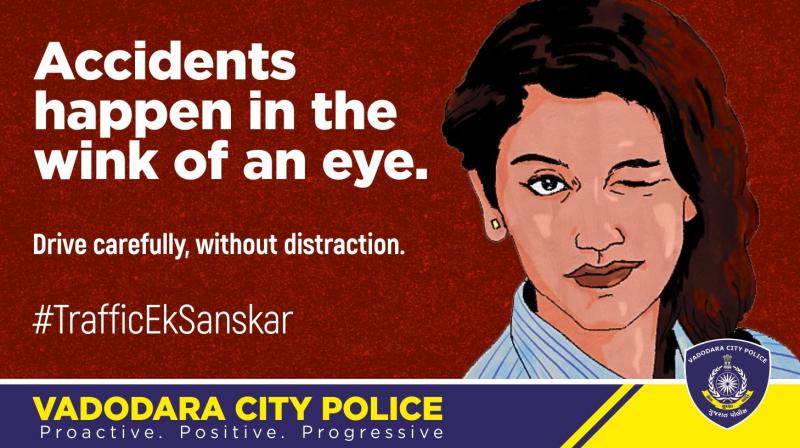 Under #TrafficEkSanskar and Priya Prakash Varrier’s wink, cops of Vadodara, on March 21, posted on their official Twitter handle, 'Accidents happen in the wink of an eye. Drive carefully, without distraction.' (Photo: Twitter | @Vadcitypolice)

New Delhi: After Delhi Police caught our attention on Twitter at the turn of the year, Vadodara police is now here to tickle our funny bones, yet with a purpose. The Vadodara City Police lately raised the bar for cops from Mumbai to Bengaluru, who try to fine-tune their social media game through witty millennial puns and pop culture references.

Quick to pick Internet’s much-appreciated and one of the most-contested sensations, Priya Prakash Varrier’s ‘infamous’ wink, the city police almost perfected the idea of safety with further filmy sneers and smart hashtags.

Under #TrafficEkSanskar and Priya Prakash Varrier’s wink to oust Alok Nath’s sanctimonious face, cops of Vadodara, on March 21, posted on their official Twitter handle, “Accidents happen in the wink of an eye. Drive carefully, without distraction.”

Teaser song Manikya Malaraya Poovi’s face, in all its glint and glory, made the Internet go weak at the knees, some time in February.

According to a report in NDTV, Manoj Sashidhar, the Vadodara Police Commissioner, elaborated on their premeditated choice of clever puns from Bollywood or modern popular culture.

“This is about connecting with citizens using day-to-day popular language and icons to drive home the point... If I tweet that bribing is a punishable offence, nobody will give it a second glance. But our tweet with the tagline Kuchh le-de ke khatam karte hain (let's settle it with something) and #SarkariMehman went viral on WhatsApp and other platforms,” Sashidhar said.

However, this is not the first time the Vadodara police has used social networking platforms to make a difference.

To bust the myth around policemen moulding law to their benefit and to convey compliance of law as binding, the city cops, on March 20, resorted to one iniquitous Chulbul Pandey aka Robin Hood from ‘Dabangg’.

Previously, campaigns on social media by Delhi, Mumbai or Bengaluru Police to fight off cyber crime, unsafe driving or sexual harassment, have received commendation across the Internet.