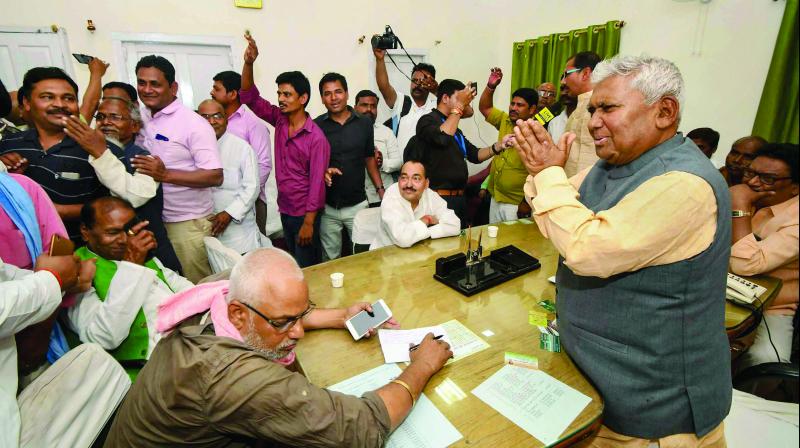 Ticket-seekers and supporters demonstrate in front of RJD Bihar president Ram Chandra Purve inside the party’s state head office ahead of the Lok Sabha polls in Patna on Sunday. (Photo: PTI)

As per the seat-sharing formula, the Nitish Kumar-led JD(U) has been given most of the Seem-anchal region seats where Muslims have maximum representation. Sources said that the BJP which doesn’t have much stake in the region agreed to give most of the Seemanchal seats to JD(U) due to Nitish Kumar’s secular image among minorities in Bihar.

Political analysts are of the opinion that the tussle in the region is likely to get interesting during polls as the RJD, which has been banking on M-Y (Muslim Yadav) combination floated by party president Lalu Yadav in the 90s, and a section of OBCs is also trying to improve its prospects among EBCs, MBCs, and dalits.

According to analysts Nitish Kumar who is often termed as “Chankaya” of Bihar politics had started working on his social engineering strategy before 2005 and managed to gain support from OBCs, EBCs, Mahadalits, and minorities.

But sources claim that the JD(U) has been worried after the RJD managed to cobble up unity with various political parties who have a strong voter base in the state.

In the present scenario, Muslims feel that they had voted for a secular allia-nce in 2015 Assembly elections but because of “pol-itical ambitions”, Nitish Kumar broke ties with Lalu Yadav and went back to the NDA fold in July 2017. The impact was seen when RJD candidate Shahnawaz Alam won the Jokihat Assembly bypoll by defeating JD(U) candidate Murshid Alam by a huge margin of 41,225 votes.

Bypoll was necessitated by the resignation of sitting JD(U) MLA Sarfaraz Alam, the elder brother of the RJD candidate who also went on to win the bypoll for Araria Lok Sabha seat on RJD ticket.

Their father Taslimuddin, whose death had necessitated the Araria bypoll, had represented the Jokihat for a record five times. Losing bypolls in 2018 had come as a jolt to chief minister Nitish Kumar who had parted ways with the RJD and Congress in July 2017.

Araria falls in Bihar’s Seemanchal region, which also comprises of Katihar, Purnea and Kishanganj districts. Sources claim that the region accounts for more than 40 per cent of the minority population in the entire Seemanchal zone.

The RJD’s vote share has been about 18- 20 percent in the last four elections, even after losing power in Bihar in 2005. Muslims and Yadavs, who form 30 percent of the state’s population, still consider Lalu Yadav as their messiah.

If we look at the figures RJD has 12 Muslim legislators which is the highest among all political parties in Bihar. Congress with 6 Muslim MLAs is second while Nitish Kumar’s JD(U) is only third in the line with 5 legislators belonging to the minority community.

Similarly, there are 11 Yadav MLAs in the JD(U) out which three are ministers in the state cabinet. Observers claim that Nitish Kumar has kept minority and Yadav representation in his cabinet all-time low.

The only Muslim minister in Nitish Kumar cabinet Firoz Alam faced a fatwa in 2017 after he chanted “Jai Shri Ram” in the assembly premises. He however later clarified his intentions after Chief Minister Nitish Kumar and other JD(U) colleagues persuaded him.

In 2010, Nitish Kumar managed to gain votes from a section in the minority community because by that time he had emerged as a “Vikas Purush”. But in 2015 after he formed a grand alliance with Lalu Yadav and Congress party – a maximum percentage of Muslim, Yadav, and backward voted in his favour.

Talking to this newspaper JD(U) MLC and spokesperson Neeraj Kumar said, “Nitish Kumar’s seven resolves and his vision has benefitted every class in the state. We are confident that NDA will return to power in 2019”.