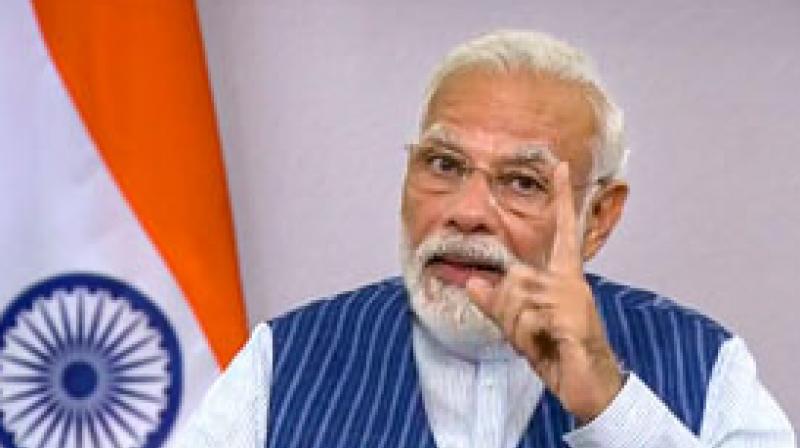 Prime Minister Modi interacts with citizens of Varanasi amid nationwide lockdown, in the wake of coronavirus outbreak, via video conferencing, in New Delhi. PTI photo

New Delhi: Asserting that social distancing and staying at home are the most effective measures against COVID-19 spread, Prime Minister Narendra Modi on Wednesday asked people to differentiate between facts and rumours regarding coronavirus and maintained that both the Centre and states governments are taking measures against the virus with utmost sensitiveness, as he reiterated his appeal for social distancing and staying at home.

Addressing people of his parliamentary constituency, Varanasi through video conferencing, Mr Modi expressed regret that he could not be with the people at a time like this but assured that he was taking regular updates about his parliamentary constituency.  He also said the participating of people during the ‘Janata Curfew’ to promote social distancing last Sunday had left the world surprised and thanked everyone who expressed support for those involved in taking care of the corona patients.

Starting his interaction by offering condolences to the family members of those killed in terrorist attack in a gurudwara in Kabul in Afghanistan, Mr Modi also wished people on the auspicious occasion of the onset of Chaitra Navratri.

Recalling how the Mahabharata war was won in 18 days and how Lord Krishna was the charioteer of Arjun from the winning side, Mr Modi said the 21 day lockdown will see India’s efforts against coronavirus showing positive results as 130 crore Indians are now charioteers.

Taking note of health professionals, those working in the healthcare sectors and aviation industry and first responders, who faced ill-treatment because of their proximity with infected people, Mr Modi said those in white coats are like God, who are helping others while keeping their life in danger.

He said he himself wrote to those involved in the Wuhan rescue operation and appreciated the all women airline crew that brought back Indians, at a time when restrictions were being imposed across the world. He also informed that as of now no vaccine against the virus has been made but scientists across the world and also in India are working in this regard.

“I appeal to all citizens that if you notice any incident where professionals such as doctors nurses are ill-treated then caution them and make them understand,” said PM Modi and added that states have been told to take action against anyone involved in such incidents.

Asking people not to heed to rumours regarding particular diet or a ritual or high temperature can contain the virus spread, Mr Modi said the virus does not discriminate against anyone whether rich or poor or any type of household or even those who exercise regularly, therefore, social distancing is one f the most effective ways to combat it.

“If I tell you that everything is all right then I will be betraying myself also…but I can assure you that the Centre and state governments are taking measures against the corona virus with utmost sensitiveness….the problems which you are facing are only for 21 days but no one can even guess the impact of this (COVID19) problem if not contained ,” said the PM as he reiterated his appeal of social distancing at staying at home.

Noting that there could be some lapses and mistakes somewhere, Mr Modi urged people not to keep highlighting them as it will do not good to the efforts against the virus.

“There can be many reasons to spread despair but life goes on through hope and trust,” said the PM asking people to encourage first responders, administration, hospitals, media and police who are working to combat the virus.