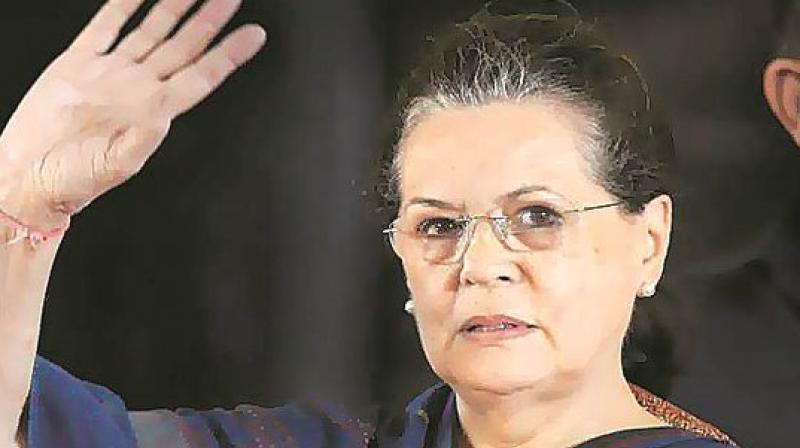 New Delhi: Flagging construction workers as one of the key groups affected financially by the coronavirus outbreak, Congress president Sonia Gandhi on Tuesday requested Prime Minister Narendra Modi to announce measures like wage support to them.

She also asked chief ministers of Congress-ruled states to ensure the same.

In separate letters to PM Modi and to the chief ministers of Congress-ruled states, Mrs Gandhi said that there are over 44 million construction workers who are faced with a precarious future now as many of them are stranded in cities and deprived of wages due to the lockdown.

"These measures have led to widespread economic disruptions that had a debilitating impact on the informal sector," the Congress president said in her letter to the PM.

Mrs Gandhi said that in the last one year, lakhs of migrant workers in major cities across India have left for their home towns and villages fearing a prolonged economic shutdown.

"As the construction sector is the second largest employer in India, over 44 million workers are now faced with a precarious future. Many are stranded in cities and are deprived of their livelihood due to the stringent lockdown measures," the letter said.

Citing the example of countries like Canada which have announced wage subsidy measures, she said: "Considering the extraordinary circumstance, I request you to consider advising the State Building and other Construction Worker's Welfare Boards to roll out emergency measures, particularly wage support to the construction workers who are in distress".

The Building and other Construction Workers (Regulation of Employment and Conditions of Service) Act, 1996 provides for various welfare measures for workers, she said adding that the Act also provides for constitution of state welfare boards and the constitution of welfare fund.

Mrs Gandhi said that it has been reported that the welfare boards collected cess amounting to Rs49,688 crore till March 31, 2019, while an amount of Rs19,379 crore had been spent.

Appreciating the tireless efforts of the Congress CMs to contain the Covid-19 pandemic, she said that this public health emergency has triggered a severe economic downturn that threatens the livelihood of millions.

"The construction sector is still reeling under the twin blow of demonetisation and GST, and slowdown triggered by Covid-19 is likely to further deepen the crisis. While lakhs of migrant workers fled large cities over the last week due to panic and stoppage of work, many are left stranded due to stringent lockdown measures and closure of public transport. Given their dependence on daily wages, it is important to provide urgent wage support to construction workers who have been deprived of work," she wrote to them.

"At this juncture, it is critical to ensure that workers are given the benefits they are entitled to under various statutory provisions," she said.