Two kids, 7 and 9, contract coronavirus from their dad in Bengaluru 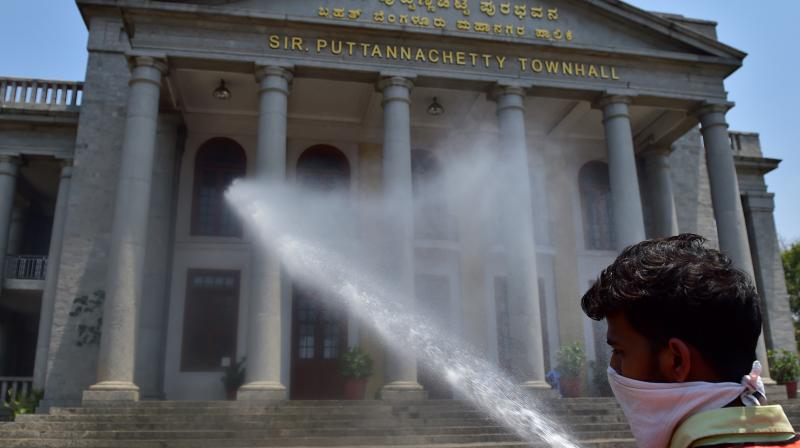 A civic worker direct a jet of sodium hypochloride on prominent buildings in Town Hall in Bengaluru as part of efforts to arrest the spread of the coronavirus Covid-19 on Martch 24, 2020. (DC Photo: Satish B)

Bengaluru: The COVID-19 count in Karnataka went up by 10 on Wednesday, reaching 51. The 10 new positives included two girls aged seven and nine who contracted the infection from their father.

The 34-year-old man had returned from Amsterdam on March 19 and tested positive as the 17th confirmed case in Karnataka.

Though his family were kept in isolation and under quarantine in their house, the children developed a cold. They were confirmed for COVID-19 infection while their mother is still negative.

This evening’s bulletin issued by the Karnataka health department continued to indicate the strong correlation of coronavirus infection and foreign travel.

Among the positive cases identified today were

Speaking to the media, medical education minister K Sudhakar said health officials were apprehensive the positives may go up tonight.

Of the corona positive cases detected in Karnataka so far, three have been discharged after quarantine, and 47 patients are in isolation at designated hospitals in a stable condition. There has been one fatality.

As per a recommendation by the high-level health committee, the government has decided to convert the Bowring Hospital into a coronavirus treatment hospital facility along with the Rajiv Gandhi Hospital for Chest Diseases and Victoria Hospital.

“The number of positive cases are growing at an alarming rate and the government needs more treatment facilities. The government is for burning of COVID-19 death cases. However, due to some of the religious practices, it has decided they would be buried under over eight feet deep pits,'' Dr Sudhakar said.

The government remained tightlipped over whether or not a 70-year-old woman from Gouribidanuru who was put under house quarantine and died on Wednesday morning, tested positive for COVID-19. Government officials would neither confirm nor deny anything on the results of tests on the woman.