Congress president Sonia Gandhi said that the sacrifice of brave men is a big loss to the nation. 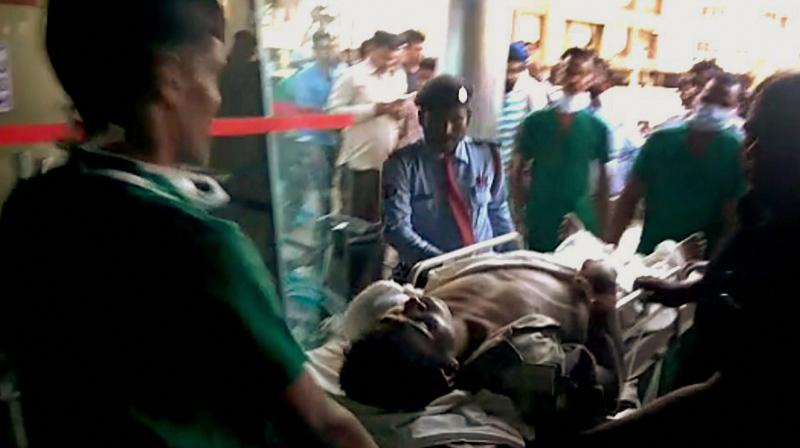 Injured CRPF being brought to Raipur for treatment on Monday follwing a Maoist attack at Burkapal near Chintagufa in Bastar. (Photo: AP)

New Delhi: After the dastardly attack on CRPF jawans which left almost 25 personnel in Chhattisgarh dead, leaders across partylines came together to condemn the incident.

Chhattisgarh chief minister Raman Singh said he was “extremely distressed” over the Naxal attack in his state that killed at least 24 CRPF personnel, and cut short his Delhi visit.

Mr Singh was in the national capital to attend some programmes and was scheduled to leave for Raipur on Monday. “I am extremely distressed to know about the Naxal attack in Sukma. I am cancelling my Delhi tour and returning to Chhattisgarh to attend a meeting,” he tweeted. President Pranab Mukherjee strongly condemned the attack on a CRPF team by Naxals in Sukma in Chhattisgarh.

“Strongly condemn attack on CRPF personnel in Chhattisgarh; condolences to families of deceased and prayers for injured,” he tweeted. Prime Minister Narendra Modi termed the attack as cowardly and deplorable. “We are proud of the valour of our CRPF personnel. The sacrifice of the martyrs will not go in vain; We are monitoring the situation closely,” he said.

“Extremely pained to know about the killing of CRPF personnel in Sukma. My tributes to the martyrs and condolences to their families,” Union minister Rajnath Singh said. He added that this attack is being taken as a challenge. He said that the minister of state for home Hansraj Gangaram Ahir is going to Chhattisgarh to take stock of the situation.

Describing the attack as a mindless and ruthless strike on our security forces, Congress president Sonia Gandhi said that the sacrifice of brave men is a big loss to the nation.

Such attacks will never deter the fight against extremism, she added. She has also expressed solidarity with friends and families of the martyrs and has prayed for the early recovery and good health of the injured.

CPM general secretary Sitaram Yechury also condemned the attack terming it as barbaric. In a tweet Mr Yechury said, “Condolences to the bereaved families of CRPF troopers. No condemnation of this barbaric attack is strong enough”