Asaram Bapu's follower reached near the jail and tried to put a garland on his poster. 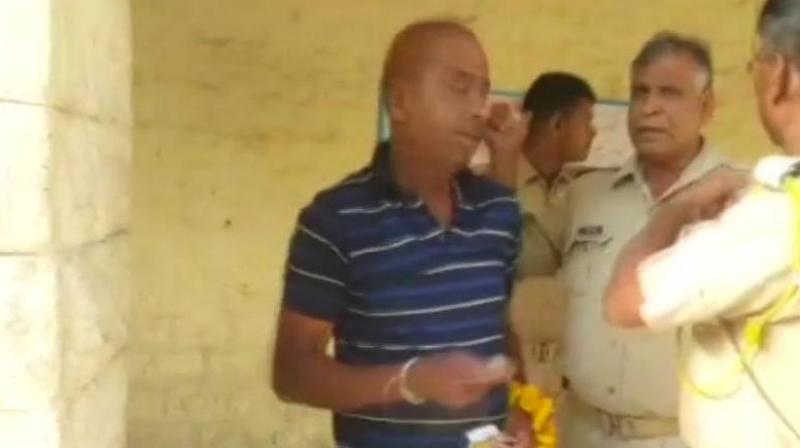 The follower managed to reach the jail despite the high-security arrangements made in Jodhpur. (Photo: ANI)

Jodhpur: A follower of Asaram Bapu was detained on Wednesday outside the Central Jail in Jodhpur where prohibitory orders have been put in place in view of a trial court verdict against the self-styled godman in a rape case.

Asaram Bapu's follower reached near the jail and tried to put a garland on his poster, but policemen caught him before he could do so. The poster was put on a wall of a corridor outside the jail boundary where the family members of prisoners wait. The follower managed to reach there despite the high-security arrangements made in Jodhpur.

Both the roads towards the Central jail where Asaram Bapu is lodged were sealed and access outside the jail had been given only to the media.

In a much-awaited verdict, the Jodhpur Schedule Caste and Schedule Tribe Court on Wednesday held guilty self-styled godman Asaram Bapu and two others for the rape of a 16-year-old girl at his ashram in 2013.

Anticipating a threat to law and order, the central government had asked the state governments in Rajasthan, Gujarat and Haryana to tighten security and deploy additional forces as the three states have a large number of followers of the 77-year-old Asaram who faces a minimum term of 10 years if convicted.

Asaram Bapu is accused of raping a teenage girl from Shahajahanpur in Uttar Pradesh, who was studying at the self-styled godman's ashram at Chhindwara in Madhya Pradesh. Asaram has denied the rape charges.

The rape survivor had alleged that Asaram called her to his ashram in Manai area near Jodhpur and raped her on the night of August 15, 2013.

Security has also been heightened around the rape survivor's house in Shahajahanpur.

Final arguments in the Asaram rape case had been completed by the special court for SC/ST cases on April 7 and the court had kept the order reserved for today.

Asaram Bapu was arrested in Indore and brought to Jodhpur on September 1, 2013. He is under judicial custody since September 2, 2013.

The chargesheet against Asaram and four other co-accused Shiva, Shilpi, Sharad and Prakash was filed by the police on November 6, 2013 under various sections of the POCSO Act, Juvenile Justice Act and the Indian Penal Code.