Mounds of rubble greet you as you try and locate the famous Vishwanath Gali leading to the temple. 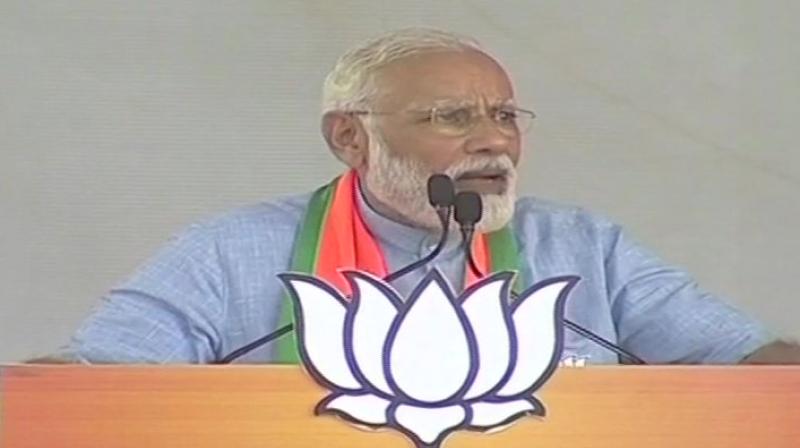 Varanasi: Kashi, they say, is known for its lanes and bylanes and all the roads lead to the Vishwanath Temple. But things seem to be changing in this city, considered as the highest seat of Hinduism and since 2014 the most high-profile constituency in the country. For Kashi is about to lose its famous “galis” leading to the temple.

A walk through the heart of the temple town, seen by many as the oldest city in the country, shows that simmering discontent is brewing over the large-scale demolition of houses and shops around Vishwanath Temple. The demolitions are being carried out as part of the work for the Kashi Vishwanath Corridor being set up by the government.

Mounds of rubble greet you as you try and locate the famous Vishwanath Gali leading to the temple. So do signs of “Kamal ka phool hamari bhool” hung outside the remaining shops.

The main problem seems to be that while hefty sums were paid to the owners of the houses demolished, most of the shopkeepers and residents who lived on rent have been left high and dry.

Says Ashish Agrawal, whose family has been running his beauty product and bangle shop in the area around the Vishwanath Temple for the past 80 years: “While the owners of our premises, Karmaical Library, have been given nearly `22 crores, the 30 shops in this building have been merely promised `50,000-1,00,000 each. With this money, we can’t rent another shop anywhere. So our source of livelihood would be lost now.”

Mr Agrawal, who along with others has appealed for a stay from the court on the ongoing demolitions, says the minimum the government can do is resettle their shops in some other locality of the city.

His 75-year-old mother, who has been sitting at the shop every day for the past 30 years, would like Prime Minister Narendra Modi to make some urgent arrangement for the rehabilitation of the many remaining shops.

Rajendra Tiwari, popularly known as Babloo Mahant, who belongs to the family of former chief priests of the Kashi Vishwnath temple and had participated in the agitation against the demolitions led by Swami Abhimuktehswaranand, who is next in line to succeed

Shankaracharya Swaroopanand, laments that the “ancient character of Kashi is being changed”. Many are unhappy about the drive against temples in homes, and says “this is a slap on the face of our ancient culture, according to which people kept gods at home and worshipped them”.

Vishambar Nath Mishra, chief priest at Sankatmochan Temple and a professor at IIT-BHU, expressed similar views, claiming temples were also destroyed as part of the demolition drive around Vishwanath Temple. Mr Mishra said there was no effort to take into account the local sensitivities involved.

Mr Mishra, who had enthusiastically supported Prime Minister Modi ahead of the 2014 election, appears somewhat disillusioned. “What benefit have we got from having the PM as our MP?”

However, some in the neighbourhood had different views. Ranvijay Rai, referring to the redevelopment, said: “We are very happy with the work. It has been achieved very peacefully.”

Bystander O.P. Chaturvedi remarked: “Mr Modi has achieved the unthinkable. Varanasi has totally benefited with the PM representing this constutiency. There is no opposition to Mr Modi here.”

Another aspect which is bothering locals is the fact that most of the work for redevelopment has gone to companies outside Varanasi. A local developer and architect who didn’t want to be named claimed part of the problem was that a Gujarat firm was chosen over local developers for the Kashi Vishwanath Corridor Project. This firm, headed by Vimal Patel, whose father Hansmukh Patel had developed the Sabarmati riverfront in Ahmedabad, has very little knowledge about Varanasi and its myriad sensitivities, he said.