Some vested interests are trying to disrupt social harmony and his government was committed to maintaining peace, Adityanath said. 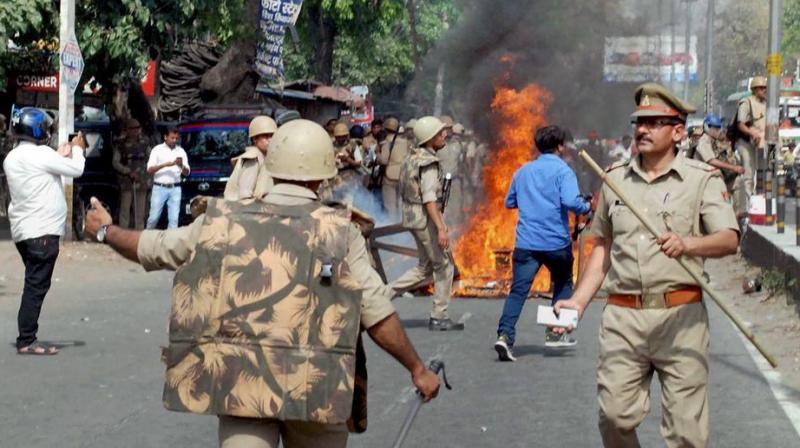 UP government has announced Rs 15 lakh as compensation to the next of kin of those killed in caste violence. (Photo: File/PTI)

Lucknow/New Delhi: Two more people were killed in caste-related violence in Uttar Pradesh’s riot-hit Saharanpur district on Wednesday, taking the toll to three in the past 24 hours.

Reacting swiftly and angrily to reports of fresh violence and rising tension in the district, chief minister Yogi Adityanath replaced the district’s top civil and police officials, and urged people not to pay heed to rumours.

Some vested interests are trying to disrupt social harmony and his government was committed to maintaining peace, he said. Internet services have been banned in Saharanpur.

District magistrate N.P. Singh and SSP Subhash Chandra Dubey were suspended for their failure to control the situation, as were an SDM and a circle officer. Pramod Kumar Pandey has been appointed the new DM of Saharanpur, while Babloo Kumar will take over as the new SSP of the trouble-torn district. Over 30 protesters who joined in the violent clashes have been arrested.

The Saharanpur caste clashes are being seen as a major law and order challenge for the two-month-old Yogi Adityanath government in the state.

Tensions have simmered in Saharanpur for a month now, with violent clashes reported between dalit and Rajput groups. On Tuesday, some unidentified people set fire to about 12 houses belonging to Rajputs in Shabbirpur ahead of BSP supremo Mayawati’s arrival.

Soon after Ms Mayawati finished addressing a rally in Shabbirpur, the village where clashes between the two communities began earlier this month, leading to the death of a dalit man, a sword-wielding mob attacked a vehicle with BSP supporters in it. The police said the attackers also fired guns, killing a 24-year-old dalit man and injuring four others.

As word spread, dalit groups allegedly rioted and threw stones, forcing shops and markets to close. Ms Mayawati’s visit to the district was prompted by the massive rally organised by the Bhim Army at New Delhi’s Jantar Mantar on Sunday to protest against the caste violence in Saharanpur.

The Uttar Pradesh government blamed Ms Mayawati’s visit on Tuesday for the violence. But it’s the sudden rise of the Bhim Army, also accused of orchestrating the violence, that is emerging as a major cause of concern for the UP administration.

This Jatav-Dalit outfit, led by Chandrashekhar Azad, is rapidly moving into the space created by the BSP. Mr Azad, sources said, has gone underground.

Blaming BSP president Mayawati for triggering a fresh bout of violence in the communally-sensitive district, a UP government statement said: “It was expected that the visit of the former chief minister would help restore peace in Saharanpur, but this has not happened and it is sad. Peace had been restored in Saharanpur but the former chief minister’s visit led to tension, followed by the unfortunate incident where one person has died”.

Ms Mayawati, in a press statement, blamed the BJP for encouraging casteist violence and disturbing harmony in Saharanpur.

UP DGP Sulkhan Singh told reporters: “I may not allow politicians to visit Saharanpur till the situation returns to normal completely.”

The spiral of violence in the district began from Shabbirpur village, home to around 600 dalits and over 900 thakurs. Dalit victims of the clashes say upper caste thakurs prevented them from installing a statue of B.R. Ambedkar on the premises of the Ravidas temple in the village.

The first incident on Wednesday was reported from Mirzapur village at around 5 am. It was case of mistaken identity. Thakurs attacked two people sleeping in a brick kiln in Mirzapur with sharp-edged weapons, presuming them to be Dalits.

Nitin and Yashpal, both belonging to the Prajapati caste, sustained serious injuries. Nitin died on the way to the hospital while Yashpal was admitted in critical condition. In the second incident, a Thakur youth was shot at by unidentified persons.