Demonstrations were staged by the DMK, its allies Congress, IUML and other friendly parties in several parts of the state and Puducherry. 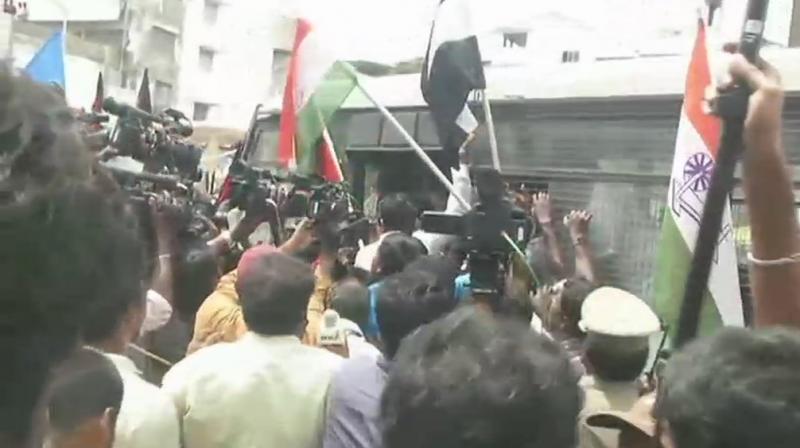 Chennai: The bandh called by the DMK-led opposition parties to condemn the Tuticorin violence in which 13 people lost their lives and to demand the resignation of Chief Minister K Palaniswami began in Tamil Nadu on Friday.

Demonstrations were staged by the DMK, its allies Congress, IUML and friendly parties like MDMK, VCK, CPI, CPI(M) and MMK in several parts of the state and neighbouring Puducherry.

Raising slogans denouncing the government and asking Palaniswami to tender his resignation, demonstrations were held at locations including Egmore and Saidapet here.

In the wake of the protest, traffic was disrupted in several locations in the city and security was tightened in all the districts of the State.

Buses of the state-run transport corporations were being operated as usual and all steps were being taken to ensure that normalcy was not disrupted, according to government authorities.

No fresh violence was reported so far on Friday from Tuticorin, which witnessed large-scale violence on May 22 and 23. Buses with police security were operated to a few locations from Tuticorin city.

Violent protests erupted in Tuticorin on Tuesday as locals took to the streets demanding the closure of a copper factory of the Vedanta group over pollution concerns.

Meanwhile, in a BSE filing, Vedanta said its Tuticorin plant closure was ordered by the State pollution control board.

"The Tamil Nadu Pollution Control Board (TNPCB) vide its order dated May 23, 2018 ordered disconnection of electricity supply and closure of the company's 'Copper Smelter Plant 1 at Thoothukudi District, Tamil Nadu' under provisions of Section 33A of the Water (Prevention and Control of Pollution) Act, 1974 and Section 31A of Air (Prevention and Control of Pollution) Act, 1971, with immediate effect," it said. "We would also like to inform that the plant was not operating since March 27, 2018," it added.