India   All India  25 May 2019  Bastions of dynasty politics fall to TsuNaMo
India, All India 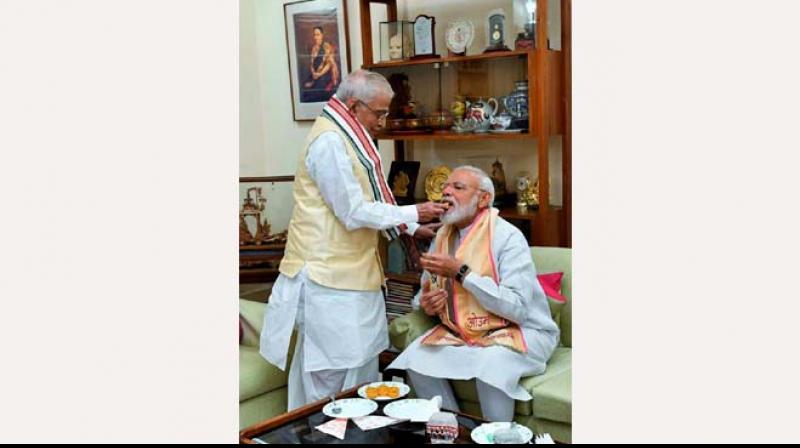 New Delhi: This elections besides delivering a body blow to the Gandhi dynasty, the Modi wave has virtually wiped out the dynastic politics in Uttar Pradesh, Bihar, Madhya Pradesh and Haryana for Congress and its allies.

Similarly, the once indomitable Chautala family is no where now as Dushyant Chautala, the great grandson of Devi Lal, and the sitting MP from Hisar lost to BJP’s Brijendra Singh. Brijendra Singh is the son of outgoing union minister for steel Birender Singh and a former bureaucrat. Dushyant had created JJP after split in INLD due to family feud. But seems the dispute did not do well either for JJP or INLD. Dushyant’s brother Digvijay lost from Sonipat while his cousin Arjun Chautala, son of INLD leader Abhay Singh Chautala lost from Kurukshetra.

In Congress, starting from party chief Rahul Gandhi who lost his traditional Amethi seat to BJP’s Smriti Irani, there were other big causalities too in dynastic politics. In Jodhpur, Rajasthan Chief Minister Ashok Gehlot’s son Vaibhav faced defeat while in Guna in Madhya Pradesh Jyotiraditya Scindia, son of Madhav Rao Scindia lost. Incidentally, Jyotiraditya had managed to save his seat in 2014 during the “Modi wave” but this time the Maharaja could not hold the fort.

In South Mumbai, senior Congressman Murli Deora’s son Milind Deora lost from South Mumbai despite having a backing from top business houses in the city.

In South, both JD (S) Chief HD Deve Gowda and Karnataka Chief Minister HD Kumaraswamy had to face embarrassment as both Deve Gowda and Kumaraswamy’s son Nikhil Kumaraswamy lost. The only saving grace for the family was Deve Gowda’s grandson Prajwal Revanna won from Hassan. Revanna has now offered to vacate that seat for Deve Gowda.

“This resounding victory signals towards the end of dynastic politics and politics of casteism. The people have reposed their faith in PM Modi, it’s the victory of the people’s faith,” outgoing minister in Modi government Dr Mahesh Sharma said after the results on Thursday.

However, the wins and loses for the dynasties remain dependent on the prevailing political wind as the ones in BJP or its allies did not face any trouble. For instance, the other side of Gandhi gamily — Maneka and Varun managed to win despite scare. Similarly, Pramod Mahajan’s daughter Poonam Mahajan, Prem kumar Dhuma;s son Anurag Thakur, Vasundhara Raje’s son Dushyant Singh and the Badals in Punjab — Sukhbir Singh Badal and his wife Harsimrat Kaur Badal — won.