India   All India  25 May 2019  Stalin, DMK leaders pay tribute to Karunanidhi after victory in LS polls
India, All India 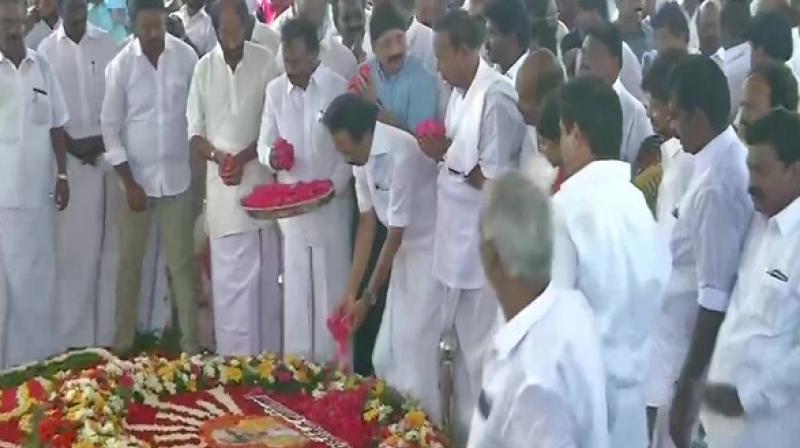 Stalin who contested his first major elections after his father and party patriarch M Karunanidhi's death last year vindicated himself by winning 37 out of 38 parliamentary seats in Tamil Nadu. (Photo: ANI)

Chennai: DMK President M K Stalin and newly elected MPs-MLAs and other leaders of the party on Saturday paid tribute to M Karunanidhi here after obtaining a resounding victory in the Lok Sabha elections.

The leaders also met party general secretary K Anbazhagan at his residence. The leaders on Friday had met M K Stalin at the party office after he got a sweeping majority in the state in the Lok Sabha elections.

Stalin who contested his first major elections after his father and party patriarch M Karunanidhi's death last year vindicated himself by winning 37 out of 38 parliamentary seats in Tamil Nadu.

Karunanidhi, who was Tamil Nadu's longest-serving chief minister, breathed his last in August last year at the age of 94 after a period of prolonged illness.

Stalin singlehandedly toured the state and led the election campaign with tailor-made programmes to interact with people at grassroots.

The AIADMK, which partnered the BJP for the general elections, has managed to win just one Lok Sabha and won nine seats in the by-polls.