India   All India  25 May 2020  Flights resume but be prepared for cancellations, rescheduling, delays
India, All India

Flights resume but be prepared for cancellations, rescheduling, delays 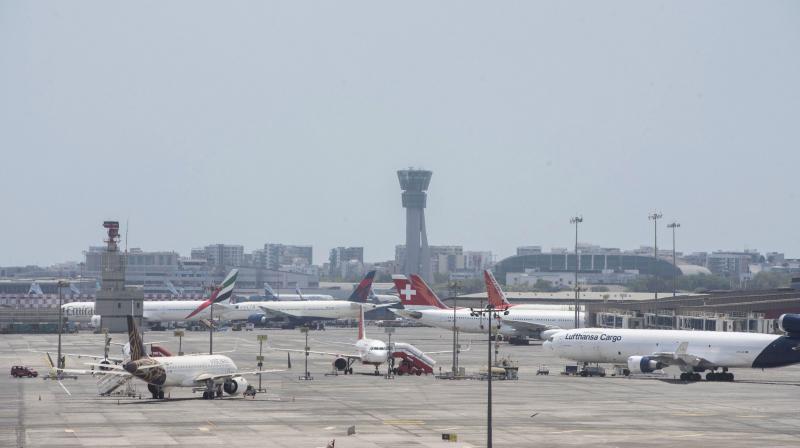 Planes parked on the tarmac at the Mumbai International Airport. (PTI)

New Delhi: After day-long negotiations on Sunday between several states and the central government, domestic flights resumed in India on Monday. After opposing resumption of flights amid the coronavirus pandemic, the Maharashtra state government late last night agreed to go along with the flight resumption, but only to a limited extent.

All scheduled commercial passenger flights had been suspended since March 25 when the government imposed a nationwide lockdown to curb the coronavirus pandemic.

Hundreds of people reached the Indira Gandhi International Airport in New Delhi to take early morning flights to their home towns and workplaces. Those who took the first flights included paramilitary personnel, army men, students and migrants, who had been unable to book a ticket on the special trains being run by the Indian Railways.

Many said they shelled out more to reach the airport as there were limited public transport options available. With trains running full and inter-state buses off the roads, Sandeep Singh, 19, spent Rs 5,500 to reach Delhi from Dehradun where he studies. "I remained stuck in my PG. Mummy and papa were a worried lot. I am taking the first flight home," he said.

A few people travelled long distances only to find that their flights had been cancelled.

Naik Satish Kumar's Kolkata-bound flight got cancelled as the state decided not to resume operations till May 28.

It was agreed late Sunday night that would be limited operation of commercial domestic flights starting Monday to and from metro airports like Mumbai and Hyderabad. Maharashtra agreed to only 25 departures and arrivals each from Mumbai from Monday, which means a total of 50 flights. The Delhi-Mumbai route is the busiest in India.

There are expected to be only 15 departures and arrivals each from Hyderabad, a total of 30 flights. Also, there may be only about 10 flights to and from Kolkata (20 flights in all) as well as from Bagdogra airport in north Bengal from May 28 onwards. Just one-fifth of the summer schedule of flights are likely to operate to and from Vijayawada and Visakhapatnam in Andhra Pradesh from Tuesday (May 26), while only one-third of flights are expected to operate to parts of Maharashtra other than Mumbai.

There was much confusion due to varying arrival protocols in states that include institutional quarantine in some. Due to this airlines revised their earlier schedules on Sunday evening to destinations like Mumbai after consulting the civil aviation ministry.

As a result, chaos and uncertainty prevailed throughout Sunday for both airlines and thousands of hapless passengers due to fly on Monday. With various states having specific arrival protocols, the passengers would also be advised to check these in advance before travel.

The Union health ministry on Sunday issued domestic travel guidelines for travel by air, train and inter-state buses, saying only asymptomatic people will be allowed to travel after thermal screening at departure points. On arrival, they will once again be thermally screened. Those found asymptomatic can go with the advice to “self-monitor their health for 14 days”.

If they develop symptoms, they should inform the district authorities. Those who have mild symptoms will have the option of home quarantine or isolation at a Covid care unit, while those with moderate or severe symptoms will be sent to a Covid care centre. Passengers were also “advised” to download the Arogya Setu app on their mobiles.

With passengers arriving from abroad by repatriation flights under the Vande Bharat Mission, guidelines were also issued on Sunday for international arrivals, under which travellers must give an undertaking in advance that they will undergo 14 days of mandatory quarantine. In case of emergencies, including distress, pregnancy or illness, home quarantine may be permitted.

The uncertainty for travellers flying to Mumbai rose after Maharashtra CM Uddhav Thackeray told civil aviation minister Hardeep Singh Puri that for now only the minimum possible domestic flights should be started, but the state government later relented to allow only 25 departures/arrivals each starting Monday.

Late Sunday night, Mr Puri tweeted it had been “a long day of hard negotiations with various state governments”, adding that domestic flights will begin on Monday, including limited flights to Mumbai, except for Andhra Pradesh where it will be from Tuesday and and West Bengal on Thursday. In Tamil Nadu, he added, there will be a maximum of 25 arrivals in Chennai, but there was no limit on the number of departures.

Late on Sunday night, Minister of State for Civil Aviation (Independent Charge) Hardeep Singh Puri tweeted that it had been "a long day of hard negotiations with various state governments", adding that domestic flights will begin again throughout the country on Monday including limited flights to Mumbai except for Andhra Pradesh where it will be from Tuesday and and West Bengal on Thursday. He added that for Tamil Nadu there will be a maximum of 25 arrivals in Chennai but that there is no limit on number of departures, adding that for other airports in Tamil Nadu, flights would operate as in other parts of country.

Puri tweeted, "It has been a long day of hard negotiations with various state governments to recommence civil aviation operations in the country. Except Andhra Pradesh which will start on 26/5 & West Bengal on 28/5, domestic flights will recommence across the country from tomorrow. Starting tomorrow, there will be limited flights from Mumbai & as per approved ⅓ schedule from other airports in the state. Limited operations to West Bengal will commence on 28th May 2020. As per request of state government, operations in Andhra Pradesh will recommence on limited scale from 26 May. For Tamil Nadu there will be max 25 arrivals in Chennai but there's no limit on number of departures.For other airports in TN flights will operate as in other parts of country."