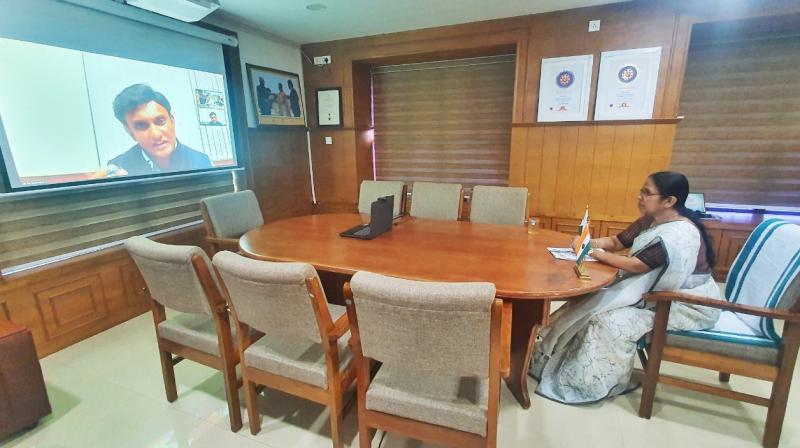 Thiruvananthapuram: Kerala’s health minister K.K. Shailaja, popularly known as Teacher, received worldwide acclaim for her handling of the Covid-19 suituation. Under her leadership, Kerala succeeded in flattening the curve and registering perhaps the lowest death rate in the world besides a very high recovery rate.

The 63-year-old minister has no time to sit on her laurels as she prepares to meet the fresh challenge posed by the recent spike in Covid-19 cases the lifting of travel restrictions.

In this exclusive interview with Gilverter Assary, Dr Shailaja shares her success mantra, how her granddaughters miss her and how her experience of teaching Marxian philosophy, dialectics of materialism and her curiosity to understand medical science terms have helped her tackle difficult situations with ease. Excerpts:

Q: How prepared are you to tackle the spike in Covid-19 cases?

Our effort is to flatten the curve. We had anticipated this situation. Because of timely measures we could tackle the three cases from Wuhan successfully, by not allowing any spread. Then came a couple from Italy which jumped quarantine norms, resulting in contact cases. Till the second phase we had 70 per cent imported cases and 10 per cent contact cases. Through effective quarantine measures, we succeeded in flattening the curve.

Most significantly we succeeded in keeping the death rate very low. Of the 512 cases in the initial two phases, only three deaths have occurred. All others have recovered.

Q. What is behind the success of the Kerala model?

I think it was comprehensive planning, well in advance. We started planning when Wuhan started reported Coronavirus cases in January. The health department constituted 18 expert groups and training for health care staff began. There was detailed stock-taking of beds, equipment and staff strength in each hospital.

All this was completed before Kerala received its first case from Wuhan on January 30. In the initial stage we had just three cases which were tackled successfully. When the cases began to increase, the Chief Minister convened a meeting of all departments and entrusted specific responsibilities.

Our effort right from the beginning was to bring all positive cases under government treatment facility and provide free treatment. Even foreigners were given free treatment. We had British citizens, including senior citizens, under treatment at the Ernakulam Medical College.

However, when we asked them, they preferred to get treated at the government medical college and lauded the facilities. They even gave in writing that they preferred government hospitals. Before leaving India after full recovery, they thanked us profusely.

The Nipah outbreak in 2018 helped us developing good team work, effective coordination between of the medical education directorate and the health department, putting in place standard operating procedures and protocols.

Q: Are you worried that situation could now go out of hand?

After the withdrawal of travel restrictions, people are coming by the air and sea routes, road and rail. We had created plan A, B and C to deal with different stages of Covid-19, where the cases are low, high and extremely high.

In medical colleges in each district, we have set aside 500-600 beds, 200-300 beds in taluk hospitals and hotels have been earmarked as Covid hospitals. The human resources required for the bed strength was mobilised, the private sector roped in and the staff trained.

We requested the Centre to allow only people in the priority category pregnant women, children, elderly, chronic patients, those who lost jobs and whose visa had expired to return home. This was to prevent a situation where 7 to 8 lakh people returned all of sudden, throwing everything out of gear.

Surveillance teams were deployed at airports, entry passes were made mandatory for people coming by road, help desks were set up at the border checkposts to segregate people district-wise and send them to their respective destinations.

At present, the majority of people are coming from Covid-19 hotspots. In the first phase people came at a time when virus had just begun to spread. The cases are high among returnees as they are coming from places like the UAE, Tamil Nadu and Maharashtra.

There is no community spread as of now but we can’t say that it will not happen tomorrow. Only when a large number of  cases is reported from the community, and that too with no travel history, can we suspect community spread.

Q: Has your background as science teacher or as leader of All India Democratic Women's Association (AIDWA, a CPM-led womens organisaton) helped in dealing with the situation effectively?

I would say a mix of everything. I could ensure teamwork because of my background as a political worker and organiser. As state secretary of AIDWA, I had the experience of coordinating with people of each district. I created a family and “we” feeling in the department. I have a set of efficient and dedicated officers who have been given freedom and space to work. They came out with brilliant ideas. I trust them and support them.

My background as a science teacher has helped to some extent. You know it is not easy to understand technical and medical terms. But I have the curiosity to understand these terms. This curiosity has been there as a politician and as a teacher. I am not a voracious reader, but I try to update myself on the new findings, spread of new viruses and read magazines. I believe in science and its ability.

As CPM leader I used to take party classes for my comrades on the subject of Marxian philosophy, and you know that science is an integral part of that philosophy. We discussed topics like evolution of universe, how to interact with nature, how to think scientifically and scientific temper. As lay people we know only basics of science and that’s not enough. So whenever I get chance, I interact with experts to enhance my understanding about different subjects.

My present secretary health Dr Rajan Khobagade is a medical doctor. The previous secretary, Mr Rajeev Sadanandan, who was there during Nipah, is an expert on medical economy. I always clear my doubts with them.

At the district level I have district programme officers who are smart young boys. When I am not able to understand a particular thing I ask them, "son please explain it to me.” They are happy to brief me on every issue. But when they seek my advise, I don the role a teacher. The youngsters feel comfortable working with me as their ideas and projects are well received. The entire staff from doctors, nursing staff, lab technicians, administrators to santiation workers, all work as a team.

As an administrator I am also a tough taskmaster. In case of any lapse I reprimand them strongly. Even for small reprimand they feel bad.

Q. Are you able to time spend time with your family, particularly your grandchildren due to the current tight schedule?

For the last two-and-a-half months I could not meet my granddaughter who is two. She lives in Kannur, about 450 km from Thiruvanantharuam. Last week, I went to meet her without informing anyone. She was so happy. All these days she was watching me on TV or on Whatsapp videoes. She was crying profusely when I left her.

It’s quite hectic. I start getting calls as early as 6 am. By 8.30 am I leave for office. There are meetings, conferences, video conferences, CM’s review meetings and discussions with expert groups though the day. I leave office by 11 pm.

Q: Opposition leaders have called you a publicity seeker. How do you react?

They attacked me personally and tried to corner me. Initially I felt very bad as I had not come across such scathing attacks. As MLA I was not into decision-making. As minister, I often come under criticism. I used to get restless and sad. My party leaders including CPM state secretary Kodiyeri Balakrishnan and Chief Minister Pinarayi Vijayan advised me not to get demoralised and go forward strongly.