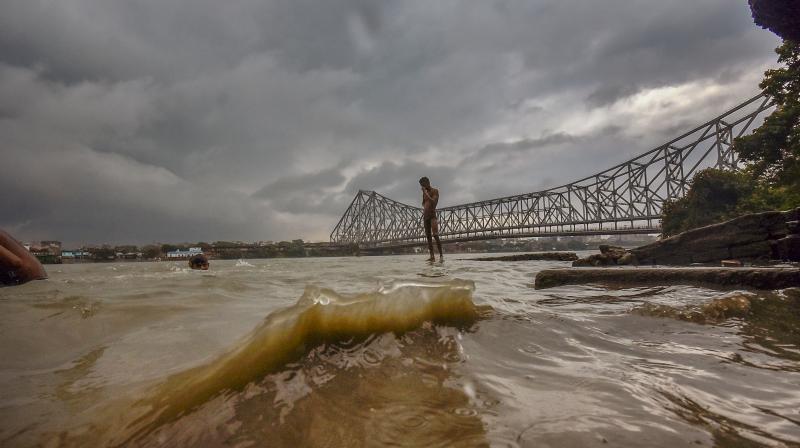 Storm like weather conditions near Howrah Bridge due to formation of Cyclone Yaas in the Bay of Bengal, in Howrah, Monday, May 24, 2021. (PTI Photo)

Kolkata/New Delhi: West Bengal Chief Minister Mamata Banerjee on Monday accused the Central government of “repeatedly depriving” West Bengal by allocating a lesser amount of money to her state than the others facing the threat of the “Very Severe” Cyclone Yaas. The cyclone is expected to make its landfall in the afternoon instead of the evening of May 26 near Balasore in Odisha.

“Amit Shah babu held a meeting in the morning and assured us of helping with advance funds which are, however, payable to the states from their share. This is not extra. Odisha and Andhra Pradesh are getting more than ?600 crore, while it is only around ?400 crore for Bengal. I pointed out to Mr Shah that Bengal is a bigger state than Odisha and Andhra Pradesh,” she said.

Mr Shah came up with some key suggestions at the meeting and in particular stressed the need to ensure electricity backup in hospitals with ICUs for uninterrupted ventilator function and oxygen supply for the treatment of Covid patients.

In its bulletin at 4.30 pm, the India Meteorological Department (IMD) stated that Cyclone Yaas “is very likely to move north-northwestwards, intensify further into a Severe Cyclonic Storm during the next 12 hours and into a Very Severe Cyclonic Storm in the subsequent 24 hours. It would continue to move north-northwestwards, intensify further and reach Northwest Bay of Bengal near north Odisha and West Bengal coasts by 26th May early morning. It is very likely to cross north Odisha-West Bengal coasts between Paradip and Sagar islands around Balasore, during noon of 26th May as a Very Severe Cyclonic Storm.”

According to the weather department’s forecast, Yaas is likely to clock its maximum wind speed at 155-165 kmph gusting to 185 kmph from 11.30 am on Tuesday for the next 24 hours.

Its maximum wind speed will however drop to 105-115 kmph gusting to 125 kmph 11.30 am onwards covering the landfall till late evening on May 26.