May add to India’s concerns over extending influence in neighbourhood. 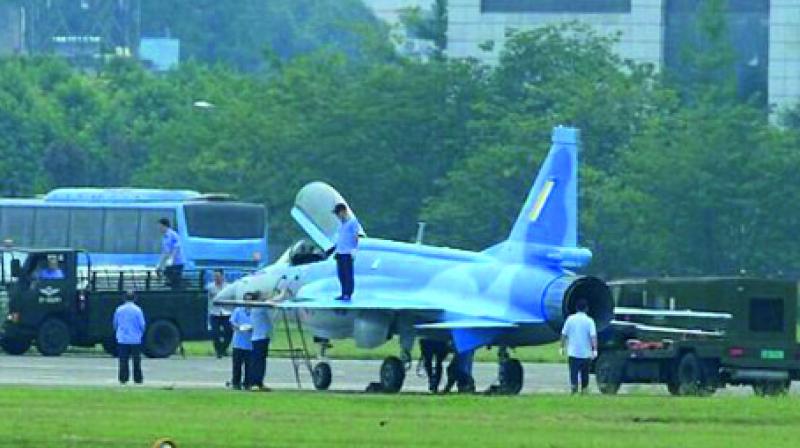 The JF-17 fighter jet with the Myanmar Air Force (MAF) logo emblazoned on its tail parked at a China airfield in Chengdu, where it has been conducting taxiing and flight tests since at least April 24. 2017.

New Delhi: Recent photographs of a JF-17/FC-1 Fierce Dragon fighter aircraft with the insignia of the Myanmar Air Force (MAF) on its tail conducting test flights in a Chinese airfield in Chengdu has lent strong credence to reports that the aircraft may be in the final stages of being supplied to Myanmar, possibly by the year-end.

Among other things, it also gives wings to Pakistan’s dreams of being a military hardware exporter. The development has the potential of substantially adding to its earnings from the export of defence equipment, which is about to touch $1 billion.

Pakistan’s media had reported on Wednesday that Khwaja Suhail Mansoor, chairman of Pakistan’s standing committee on defence production, had told the country’s Senate that in the current fiscal year that ends next on Friday, the value of defence exports was $98.3 million, a 55% jump from a decade back.

While the JF-17 is supposed to be a major joint collaborative effort to manufacture and sell combat planes by Pakistan Aeronautical Complex and the state-owned Chengdu Aircraft Industry Corporation (PAC/CAC), it is reported to have been mainly developed by China by improvising its CAC FC-1 Xiaolong air fighter.

Myanmar may be the first country to buy these planes to replace its fleet that includes 24 aging J-7 fighters and 16 A-5IIK ground attack aircraft. MAF has a fleet of 112 fighters, about 80 trainer aircraft, 25 transport aircraft, and around 140 helicopters.

In July 2015, Myanmar had signed a deal for 16 JF-17 Block II aircraft at a unit cost of $16 million, the Jane’s Defence Weekly, quoting diplomatic sources, has claimed. There are also reports that Myanmar may also be considering to buy an additional unspecified number of JF-17s, which may add to India’s diplomatic concerns over extending areas of influence in its immediate neighbourhood. India and Myanmar share a 1,640-km-long border across Arunachal Pradesh, Manipur and Nagaland. Myanmar’s support is seen as vital to combat armed insurgents from Assam, Nagaland and Manipur, who operate from training camps in Myanmar.

While the JF-17 Block II variant of the light multi-role and combat fighter is an improved version of the Block I fighter and includes mid-air refuelling as one of the main improvements, in reality, in a world where the skies are ruled by ultra-modern fighters with stealth capabilities that are specifically designed to attain air superiority, the role of the JF-17 will be, at best, to provide close air support or for defensive operations.

Nigeria is also expected to place some orders for the JF-17 soon while Sri Lanka has also shown some interest. With China’s active help, the Pakistan Air Force is also pursuing an ongoing effort to build and induct about 150 JF-17 fighters.