Rath Yatra is the celebration of Lord Jagannath, who is believed to be the Lord of Universe. 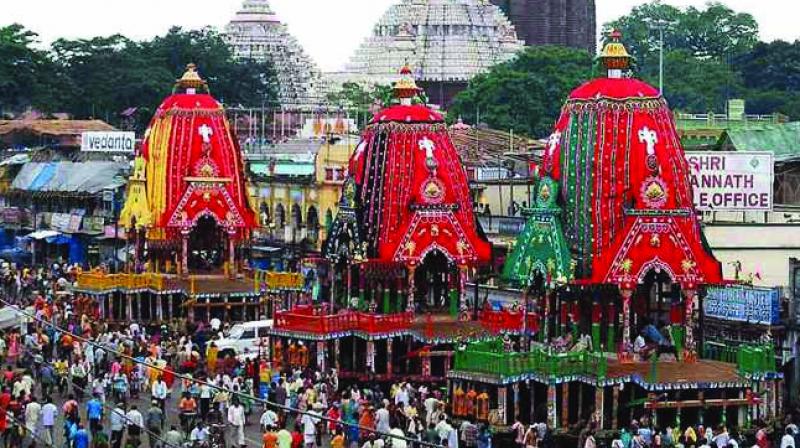 Rath Yatra is the celebration of Lord Jagannath, who is believed to be the Lord of Universe.

Otherwise known as Car Festival, the grand Rath Yatra cultural festival will commence on Sunday morning with devotees of all castes and colours hailing from across the world pulling the chariots of the deities from Srimandir or Jagannath temple to Gundicha temple, which is considered as the aunt’s place of the deities.

Rath Yatra is the celebration of Lord Jagannath, who is believed to be the Lord of Universe. Though it is a Hindu shrine, the car festival is open to devotees of all faiths. What marks the festival this year is that people belonging to other religions have congregated in a large number in Puri to see the deities on the chariots. During other days, no non-Hindu is allowed to see the deities in Srimandir.

State director general of police K.B. Singh said as many as 127 platoons of police personnel and three platoons of newly raised Odisha Swift Action Force have been deployed for smooth conduct of the festival.

Over 15 lakh devotees are expected to gather at Puri to witness the grand religious festival.

According to Jagannath cult researchers, the Rath Yatra is more than five thousand years old and the most spiritual thing is, the celebration follows all the same rituals from its starting.

The popular Rath Yatra is the time when the deities come out of the temple for all to see. Lord Jagannath’s chariot is called as Chakradhwaja or Nandhighosa, which simply describe about tumultuous and blissful sound. Lord Balaram’s cart is called Taladhwaja, which means the sound of significantly powerful rhythm.