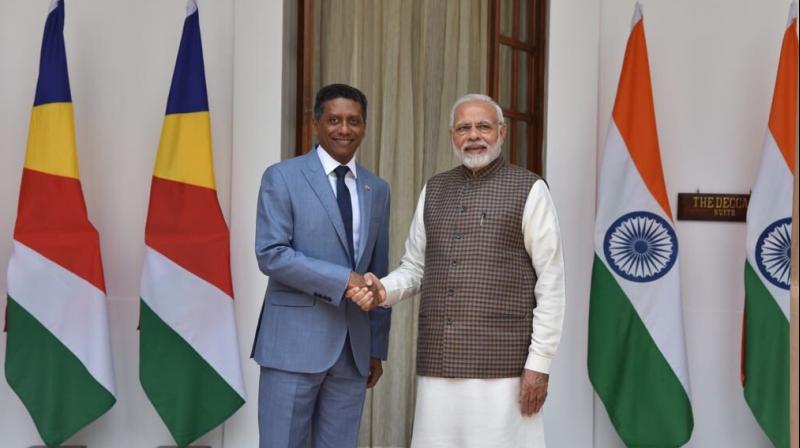 During the meeting, India and Seychelles agreed to work together on a project to develop a naval base at the Assumption Island keeping each other's concerns in mind after the talks.

Prime Minister Narendra Modi said, "We have agreed to work together on the Assumption Island project based on each other's rights."

He added that India and Seychelles were committed to maintaining peace and stability in Indian Ocean region.

Faure, in his remarks, said the Assumption Island project was discussed and the two countries equally engaged to work together bearing each other's interests.

The positive comments towards the Assumption Island project however come just days after Faure said that a joint project with New Delhi to develop a naval base there would not move forward.

There has been growing political opposition in Seychelles to an agreement it signed with India in 2015 to develop a naval facility at the island which would have given New Delhi a strategic advantage in the Indian Ocean Region.

A total of six agreements were signed between India and Seychelles after talks between the two leaders in areas of naval cooperation, cyber security, culture and so on.

In a goodwill gesture, Seychelles has gifted a pair of giant Aldabra tortoise to India.

Thanking Seychellois President Danny Faure for the gift, Prime Minister Narendra Modi said the creatures with long life span have witnessed three centuries and are a symbol of "our ever-lasting" friendship.

PM Modi also handed over a replica of Dornier Aircraft to the Seychelles President.

The Seychelles President, who is on his first bilateral visit to India, was accorded a ceremonial welcome at the Rashtrapati Bhavan by President Ram Nath Kovind and Prime Minister Modi Monday morning.

The Seychelles president had landed in Gujarat on Friday as part of his six-day India tour. After visiting Ahmedabad and Goa, he arrived in Delhi on Sunday and was received by Minister of State for External Affairs M J Akbar.

During his visit, he also met with Panaji Mayor, Vitthal Chopdekar to discuss areas in which the Goan capital and Victoria, capital of the African nation, could cooperate in connection with the Twinning Agreement between the two cities.

A Twinning Agreement is a social or legal tie-up between two cities, generally in geographically distinct areas, to promote cultural and commercial links.

Faure and Chopdekar discussed ways to cooperate in areas like port exchanges, marine security, tourism, heritage preservation, people-to-people contact and fisheries, officials said. The Corporation of City of Panaji (CCP) has been nominated as the nodal agency to execute the twinning understanding arrived between India and Seychelles.

The agreement will be formally signed in New Delhi.