President Faure had earlier begun his six-day official visit from June 22 and had visited Gujarat. 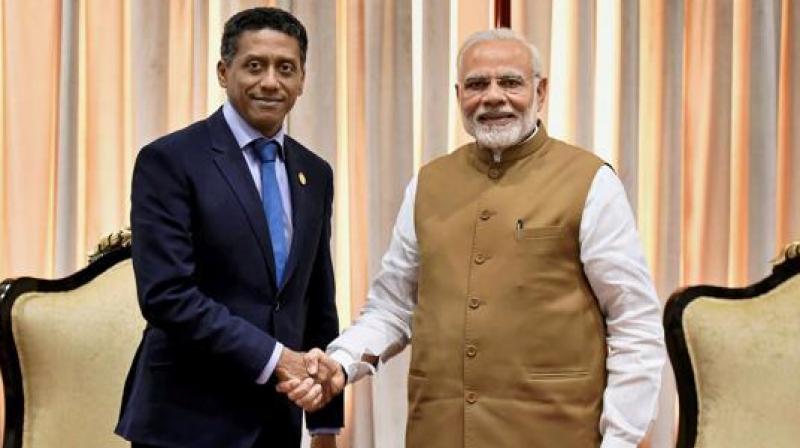 New Delhi: After the failure of a key security-related strategic move by India with the Indian Ocean nation of Seychelles for “the development, management, operation and maintenance of facilities” on Assumption Island in that country, Seychelles President Danny Faure landed in New Delhi on Sunday evening for talks with the Indian leadership, including Prime Minister Narendra Modi, which will take place on Monday. President Faure had earlier begun his six-day official visit from June 22 and had visited Gujarat.

New Delhi is likely to raise the Assumption Island issue with him during Monday’s talks but India may have to overlook the setback and focus on other avenues of security and defence cooperation. India had in January this year inked an agreement on this with Seychelles which, much to New Delhi’s dismay, could not be ratified by the Seychelles Parliament as the Opposition parties there were fiercely opposing the project.

MEA spokesman Raveesh Kumar tweeted on Sunday: “Connected by ‘SAGAR’ — Security and Growth for All in the Region! President of Seychelles Danny Antoine Rollen Faure warmly received ... at Delhi airport on his first bilateral visit to India.”

On Mr Faure’s visit to Gujarat earlier, the Mr Kumar tweeted: “Historical connections between Seychelles and the western coast of India! Indian traders migrated from Gujarat to the Seychelles and maintained business ties with India. History, trade and culture remained linked.”

Sounding the death knell of the project recently, Mr Faure had recently reportedly told his country that the Seychelles would build the facilities itself. There has been speculation that New Delhi could try to once again renegotiate the agreement during the current visit.

Just hours before the MEA announced the visit, a top Seychelles foreign affairs ministry official told an international news agency that the Seychelles Parliament would not ratify the pact allowing India to build naval facilities on Assumption Island and that the government would simply not present the agreement to the National Assembly (parliament) for approval because Opposition members (who are in the majority) had already said they would not ratify it. The Opposition MPs had reportedly argued that allowing India access to Assumption, which is near a busy shipping route, would be surrendering territory to another country and joint management of the facility with India undermined the 115-island nation’s sovereignty.

India had inked the agreement with the Seychelles in January this year as part of counter-piracy and counter-terrorism cooperation with the Seychelles. This was also to “prevent intrusions by potential economic offenders indulging in illegal fishing, poaching, drug and human trafficking”. This had come at a time when China is increasing its footprint in the Indian Ocean region. India has also been helping the Seychelles carry out coastal radar surveillance. A few months later, New Delhi said that the facility is “owned by the Seychelles” and “jointly managed by both sides”.