It is indeed paradoxical that a lot of noise has been made about Rahul Gandhi choosing to give Prime Minister Narendra Modi a “hug.” 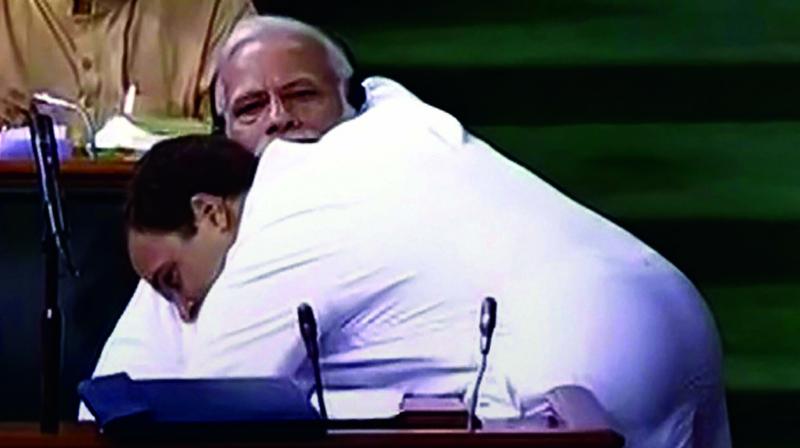 Congress president Rahul Gandhi hugs Prime Minister Narendra Modi after his speech in the Lok Sabha on no-confidence motion during the Monsoon Session of Parliament, in New Delhi on July 20. (Photo: PTI)

It is indeed paradoxical that a lot of noise has been made about Rahul Gandhi choosing to give Prime Minister Narendra Modi a “hug.” One had assumed that the prime minister was excessively fond of giving hugs. So, apparently, Rahul chose to “hug” him, after attacking his policies. However, Rahul erred in understanding that the premier’s hugs’ importance is confined to leaders from other countries. This implies that Mr Modi believes in “hug diplomacy” -irrespective of whether it has any impact or not, whether it is received with the same warmth that he displays in giving them- and apparently not in “hug politics” at the national level.

This certainly demands speculation on whether Mr Modi has extended hugs to national leaders with the same “passion” as he has to international leaders. He appears not to have. Rather, most often than not, he has not refrained from giving the impression of his being head and shoulders above others as well as much ahead of them in the Indian political domain. This includes allies of BJP and intra-party colleagues of Mr Modi.

This point has been specifically made to draw attention to difference displayed by Mr Modi to his “hugs” at two levels, diplomatically and domestically. If, in all probability, at an international gathering, a leader of another country had walked up to Mr Modi to give him a hug as had Rahul, the former would have immediately got up and responded promptly with ear-to-ear smiles and of course a long hug.

This behaviour was not displayed towards Rahul’s hug. Now, politically speaking, would it be fair to assume that Rahul erred by choosing to walk up to Mr Modi and try giving him a hug? Or did the latter err by not responding to it appropriately? This is indeed debatable. Considering the significance that Mr Modi has accorded to hugging even his diplomatic rivals, Rahul probably tried adopting the same line. When in December 2015, Mr Modi suddenly visited the then Prime Minister of Pakistan Nawaz Sharif, he gave him a hug too. Of course, considering the nature of Indo-Pak ties, Mr Modi’s “hug diplomacy” has had little relevance. In fact, the same can be said about practically all diplomatic hugs of Mr Modi. It would be erroneous to assume that his hugs have played any major part in contributing to key changes/upswings in India’s relations with any country.

Against this backdrop, at most, Mr Modi’s hugs may be assumed to be a key part of his own image promoting agenda. He presumes that these contribute to elevating his diplomatic stature at the global as well as regional and other levels. But this is his presumption, one which cannot be viewed as the same as held by leaders he has chosen to give a hug.

Rather, quite a few have been fairly surprised by his sudden hugs and have also not responded as warmly as Prime Minister Narendra Modi has chosen to hug them. And this is not surprising. Hug-diplomacy does not, apparently, figure as significantly in their agenda as it does in Mr Modi’s. The same can also be said about nature of hugs, if they do choose to indulge in this agenda. A little warmth is added to hand-shake diplomacy by at most tapping each other on shoulders, which is equivalent to not even half a hug.

The Arab leaders’ hugs are of totally different nature. Their indulgence in hug-diplomacy is often decided by countries to which other leaders belong and of course their gender. Normally, Arab leaders hug each other and have no problems in greeting non-Arab leaders with hand-shakes.

They are not visible going overboard in giving “hugs” to all leaders even though hugs may be viewed as an essential part of their socio-political culture.

Undeniably, hugs are an intrinsic part of Indian culture too. Close friends, relatives and even acquaintances are visible hugging each other on numerous occasions, including festivals, celebrations and so forth. When there is good news, the instant reaction is to just share it with a hug. When words fail on their being a sad incident, nothing but a long hug does the needful.

Of course, on similar occasions, the same importance is given to hugs in practically all parts of the world. Yes, nobody can deny such social significance held by hugs at people-to-people level universally.

But there surface reservations, when it comes to diplomacy and politics. Politically speaking, it may be said, at most Rahul meant to convey that whatever be his and Mr Modi’s political differences, his intention was not to hurt him.

Also, considering the hug-diplomacy promoted by Mr Modi himself, the Congress leader chose to include it in his political agenda, if only for a brief while. It may be noted, Rahul has been hardly visible in giving “hugs.” But this “hug” of his has certainly earned substantial media coverage. Irrespective of how his political rivals view this “hug,” people in general – at home and abroad – are not oblivious of importance of these hugs, culturally as well as in connection with Mr Modi’s hug-diplomacy.

The big question is, what is debatable, Rahul’s hug or Mr Modi’s response to it?