BJP in no hurry over Karnataka govt 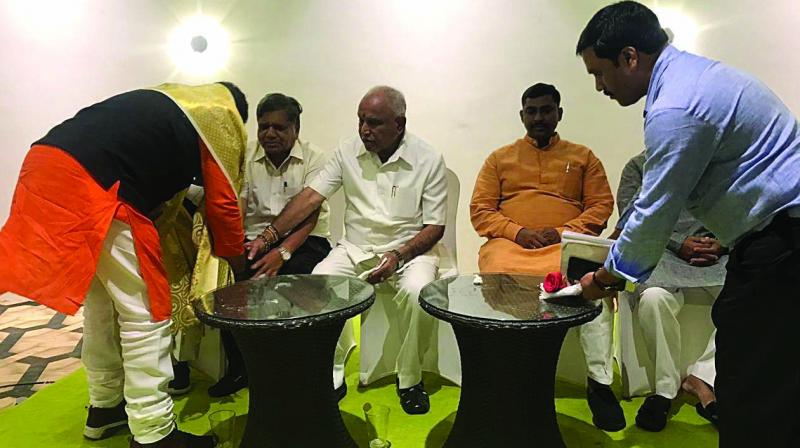 Karnataka BJP president B.S. Yeddyurappa celebrates with his party leaders by cutting a cake in Bengaluru on Tuesday night after Karnataka chief minister H.D. Kumaraswamy lost the vote of confidence in the Assembly. (Photo: PTI)

Bengaluru/New Delhi: A day after emerging victorious in his efforts to unseat the JD(S)-Congress coalition government in Karnataka by defeating the confidence motion moved by chief minister H.D. Kumaraswamy, BJP state chief and CM-in-waiting B.S. Yeddyurappa made it clear that nothing had been finalised yet on government formation, adding that he was still awaiting instructions from the central leadership on staking claim to form an alternative government.

“I’m awaiting instructions from Delhi. I can call the legislature party meeting any time and go to Raj Bhavan (to stake claim). I’m waiting for it,” Mr Yeddyurappa told reporters after meeting RSS leaders at its state headquarters “Keshava Krupa” here.

A delegation of the BJP state unit left for New Delhi Wednesday evening to meet party chief Amit Shah. State leaders had expected the BJP parliamentary board to take a decision on Wednesday and direct them to convene the legislature party meeting, but no instructions came from New Delhi. Sources said a restless B.S. Yeddyurappa asked his supporters to rush to Delhi to meet Mr Shah to discuss the matter. Later, a delegation headed by former CM Jagadish Shettar left for the capital. BJP leaders Aravinda Limbavali, J.C. Madhuswamy, Basavaraj Bommai, K.G. Bopaiah and B.Y. Vijayendra are with him.

Sources said the BJP top brass is moving cautiously on the issue of government formation as the fate of the 15 rebel MLAs, who played  a pivotal role in toppling the Kumaraswmay government, is yet to be decided by Speaker K.R. Ramesh Kumar. With their resignations yet to be accepted,  the applicability of a whip issued by the Congress or JD(S) to them, if Mr Yeddyurappa is sworn in and seeks a trust vote, is a vexed issue that the BJP is grappling with. Earlier, the Supreme Court had said the rebels cannot be forced to  participate in the Assembly proceedings but the question remains if a whip will apply in the changed circumstances now that the coalition government has made its exit.

The BJP reportedly wants to make sure that there are no legal loopholes before it installs the Lingayat veteran as CM.

Outgoing CM H.D. Kumaraswamy, however, is in favour of the imposition of President’s Rule, asserting that the BJP too would find it difficult to prove its numbers in the Assembly. Talking to reporters, Mr Kumaraswamy said: “It will be very difficult for the BJP to run the government in future.”

However, it remains to be seen if the BJP will take the risk of depriving Mr Yeddyurappa of the chance to become CM for a fourth time and instead impose

President’s Rule, hoping to get a comfortable majority when Assembly polls are held along with the polls in some north Indian states in November. This is sure to annoy the loyalists of the former CM and the dominant Lingayat community to which he belongs, considering the painstaking efforts he put in to unseat the coalition government.

Meanwhile, a race has begun in the Congress for the coveted post of Opposition leader in the assembly if a BJP government is formed, with Congress legislature party leader Siddaramaiah, outgoing deputy CM G. Parameshwar and outgoing water resources minister D.K. Shivakumar reportedly throwing their hats into the ring. The frontrunner no doubt is Mr Siddaramaiah, who has the experience of working as Opposition leader when the BJP was in power from 2008 to 2013.

In a related development, JD(S) supremo H.D. Deve Gowda, on realising that the JD(S)-Congress coalition has become shaky after the exit of the Kumaraswamy government on Tuesday, instructed his MLAs to prepare to go it alone in the Assembly bypolls which would be necessitated if the resignations of the rebel MLAs are accepted. Talking to party MLAs at the

JD(S) office, Mr Deve Gowda said: “We do not know what the thinking in the Congress Party is now. If they do not want the coalition to continue, we should be prepared for such an eventuality and fight the byelections on our own.”

In some other developments, expelled BSP MLA N. Mahesh, who abstained from the trust vote on Tuesday despite instructions issued by party supremo Mayawati to support the coalition government, has claimed that his expulsion was an outcome of a “communications gap” between him and the party leadership. He stoutly denied speculative reports that he was a victim of “Operation Kamala” launched by the BJP.

Now that the trust vote is over, the two Independent MLAs urged the Supreme Court to allow them to withdraw their plea seeking a direction to the Assembly Speaker Ramesh Kumar to conduct the floor test “forthwith”.