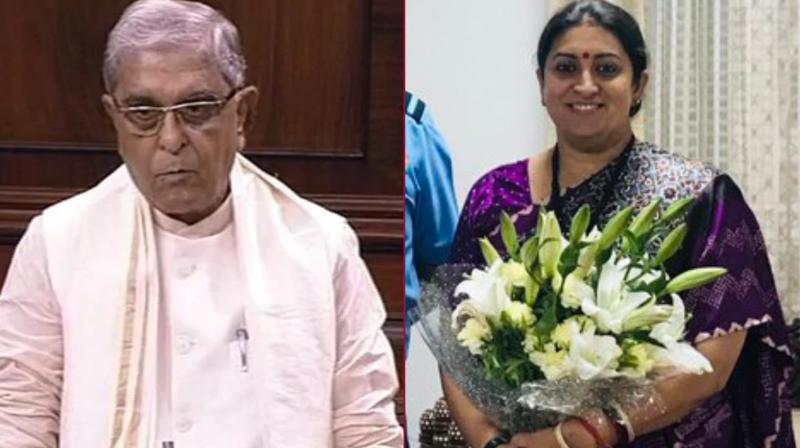 She interjected and asked Yadav 'to be decent while explaining his concerns'. (Photo: File)

New Delhi: On Wednesday, Union Minister Smriti Irani asked a BJP lawmaker from Uttar Pradesh to be careful with his choice of words when he was speaking on the proposed changes to a law on sexual crimes against children in Parliament.

BJP lawmaker Harnath Singh Yadav had blamed the content on TV and social media for the rise in sexual offenders during the debate in Rajya Sabha. "The question is where are these sexual offenders coming from? The fact is, what we are serving is what we are getting," he said.

On Tuesday, Smriti Irani introduced the Protection of Children from Sexual Offences (Amendment) Bill, 2019 in the Rajya Sabha. She interjected and asked Yadav "to be decent while explaining his concerns".

Irani said: “Yadav ji is elder to me, but there are a lot of women sitting here and this discussion is being viewed by the entire country. Please be a little decent while explaining your concerns.”

"Film actresses are selling condoms in advertisements. On music channels, the songs that get played are Munni Badnaam Hui, Chikni Chameli, Jhandu Balm, Tere Saath Karunga Gandhi Baat... The minds of children are gentle. What effect will these things have?" he had said.

The bill involving amendments to the POCSO Act by including death penalty for aggravated sexual assault on children was passed by the Rajya Sabha on Wednesday. It will now be sent to the Lok Sabha.