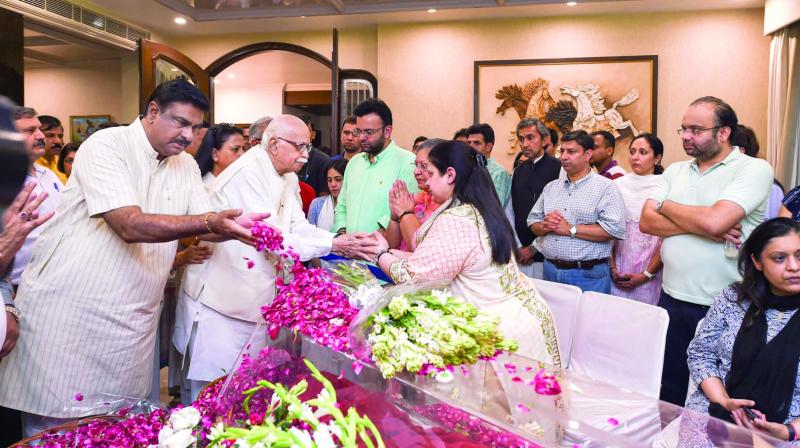 New Delhi: BJP stalwart and party trouble-shooter Arun Jaitley died on Saturday at AIIMS. The AIIMS in its statement said Jaitley died at 12.07 pm. Jaitley, 66, was admitted in AIIMS on August 9.

In a brief statement, the hospital said, “It is with profound grief that we inform about the sad demise of Arun Jaitley, former finance minister of the Government of India, at 12.07 pm on August 24. Jaitley was admitted in AIIMS on August 9 and was treated by a multi-disciplinary team of senior doctors.” The AIIMS sources had earlier said he was on life support.

Jaitley had undergone a renal transplant on May 14 last year at AIIMS and his health condition gradually worsened, forcing him to take frequent breaks from his work.

In May this year, Jaitley was admitted to AIIMS for treatment. He underwent a surgery in the United States in January this year. In September 2014, he underwent bariatric surgery to correct the weight he had gained because of a long-standing diabetic condition.

The urbane and media-savvy leader was one of the sharpest political minds not only within the BJP but also in the larger political spectrum where he made lifelong allies cutting across the ideological divide.

He was perhaps among the BJP bigwigs who made a smooth transition from the Atal-Advani era in the party to the one where Narendra Modi dominated, ushering in the rise of a new generation leaders. As soon as his death was reported, leaders cutting across party lines paid rich tributes with Prime Minister Narendra Modi calling him a “valued friend”.

“With the demise of Arun Jaitleyji, I have lost a valued friend, whom I have had the honour of knowing for decades. His insight on issues and nuance understanding of matters had very few parallels. He lived well, leaving us all with innumerable happy memories. We will miss him,” Mr Modi tweeted.

The Prime Minister is on a visit to France, UAE and Bahrain. Mr Modi is due to return after attending the G-7 Summit in France on Monday.

According to sources, Jaitley’s wife and son insisted that Prime Minister Narendra Modi should not cut short his three-nation tour following his demise. “Both of them insisted that PM does not cancel his current foreign tour,” he said.

Securities were beefed up in and around AIIMS after doctor’s confirmed Jaitley’s demise. Senior Delhi police officials were seen monitoring security arrangements at the hospital.

After completing the embalming procedure, the mortal remains were handed over to his family members. Around 3 pm, the remains were taken to his residence at Kailash Colony in South Delhi from AIIMS. Party leaders from across the political spectrum, BJP workers and his admirers filed past the body, which was kept in a glass casket, offering flowers and wreaths.

Thousand of BJP workers and neighbours of the departed leaders in Kailash Colony also paid their last respect to Jaitley. Dr Vardhan was prominently seen managing their affairs at the entrance of Jaitley’s residence for several hours.