Swaraj held bilateral meetings on the sidelines of UN General Assembly and discussed issues such as trade, investment and capacity building. 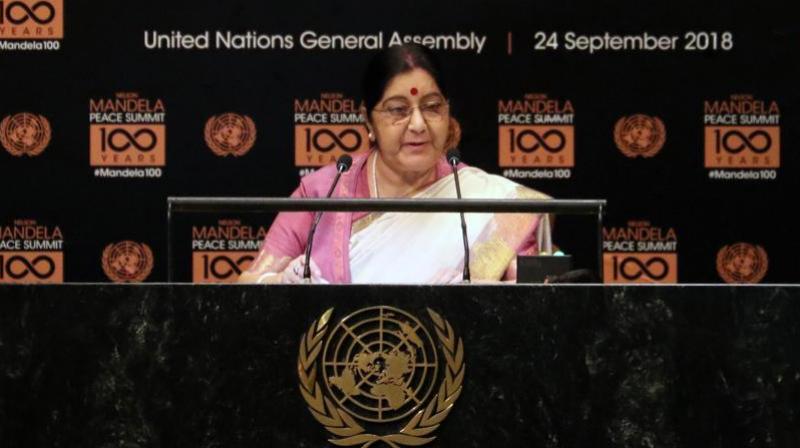 United Nations: External Affairs Minister Sushma Swaraj held bilateral meetings on Monday with her key foreign counterparts on the sidelines of the high-level session of the General Assembly here and discussed several issues including trade, investment and capacity building.

In a series of tweets, Ministry of External Affairs Spokesperson, Raveesh Kumar, spoke about the meetings held.

In another tweet following Swaraj's meeting with the Foreign Minister of Ecuador, Jose Valencia Amores, he said that the two leaders had engaged in a “good discussion on ways to further consolidate bilateral relationship in the areas of trade, agriculture, pharma, IT and capacity building."

EAM @SushmaSwaraj and Spanish Foreign Minister @JosepBorrellF met on the sidelines of UNGA and explored ways to intensify ties in investment, renewable energy, water treatment, tourism and their contribution to our flagship initiatives. pic.twitter.com/4OpIM3iUf8

Referring to Nepal as a "close neighbour and a friend", Kumar said that Swaraj had met with Foreign Minister, Pradeep Kumar Gyawali, to take "stock of our bilateral relationship".

Close neighbour and a friend! EAM @SushmaSwaraj and Foreign Minister of Nepal, Pradeep Kumar Gyawali met on the sidelines of the #UNGA2018 and took stock of our bilateral relationship. pic.twitter.com/KJ5YDR9JUy

External Affairs Minister, Swaraj also met with the EU High Representative, Federica Mogherini on Monday. The two leaders engaged in discussion on issues related to trade and investment and exchanged views on the regional and global issues.

Raveesh Kumar on Twitter termed it a "strategic partnership based on common values of democracy, freedom and rule of law".

Strategic partnership based on common values of democracy, freedom and rule of law! EAM @SushmaSwaraj and EU High Representative @FedericaMog met on sidelines of #UNGA. Discussed issues related to trade & investment and exchanged views on the regional and global issues. pic.twitter.com/psjog0BK9A

She will also participate in the G4 meeting with her counterparts from Brazil, Germany and Japan.

Swaraj attended the high-level event on counter-narcotics hosted by US President Donald Trump and addressed the Nelson Mandela Peace Summit.

Nelson Mandela’s life is an inspiration for all. He showed fearlessness and courage in the face of discrimination and adversity: EAM @SushmaSwaraj while delivering her statement at the National Mandela Peace Summit. Full statement at https://t.co/tGpSpAzZjb pic.twitter.com/Kw0Kmk0KgT

Friends meet on every occasion.

Foreign Secretary Vijay Gokhale participated in a special meeting on Conference on Interaction and Confidence Building Measures in Asia.