Malnutrition-free India by 2022: Is it a realisable goal?

Over 800 women die every day in childbirth, and 20 per cent of them are from India. 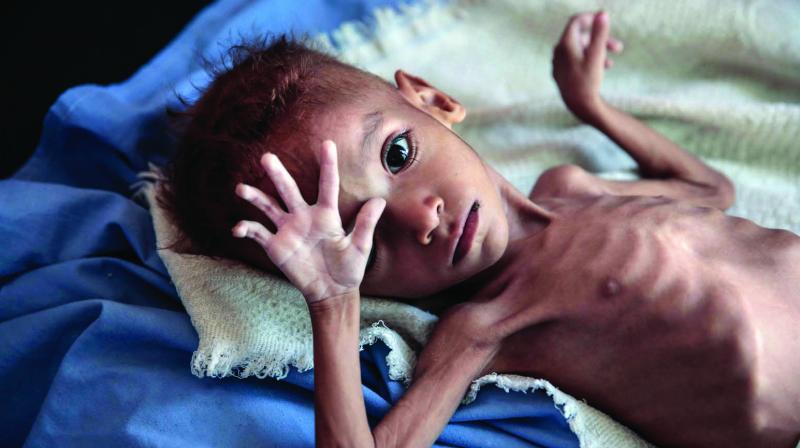 Children eating roti and salt in a mid-day meal in a Mirzapur primary school in UP shocked many of us. But, more shocking was charging the very journalist, who broke the story, with criminal conspiracy. Ironical indeed! Only a couple of months back, a notification from the human resources development ministry asked all states for “strict adherence to nutrition standards in midday meals and collection of students’ feedback”.

India’s midday meals scheme was adjudged the world’s largest school programme feeding nearly 120 million children daily by the World Food Project (WFP) in 2013. However, an HRD review mission in 2013-14, made the observation that it could make “little impact on malnutrition among schoolchildren and a large number of elementary school children remained severely malnourished in as many as nine states, with the highest figure of 31 per cent girls and 24 per cent boys in Uttar Pradesh”. Many nutritional experts felt that “providing nutrition through one hot-cooked meal is not easy... it is also necessary to add calories with animal-based proteins”. Unfortunately, in India, introduction of eggs to midday meals, considered as ‘cheaper, safer, nutritious source of protein’, is mired in controversy for reasons like ‘upper-caste vegetarian interests’ or ‘doubts about their nutritional value’.

The recently released Lancet Child and Adolescent Health report indicated that malnutrition still poses the underlying risk factor for 68 per cent of the deaths in under-five children in India. Sadly, more than one third of the world’s malnourished children live in India, and it tops the list with 46.6 million stunted children as per the 2018 Global Nutrition Report. India is also home to about 25.5 million wasted children (low weight for height), a strong predictor of under-five mortality. The report said that stunting prevalence is above 40 per cent in 239 out of 604 districts surveyed (NFHS-4).

World Bank’s first Human Capital Index (HCI) in 2019 ranked India at 115 among 157 countries with a score of 0.44 on a scale of 0 to 1, which makes an Indian child born today will be only 44 per cent productive at the age of 18 with complete education and full health. India, however, rejected the assessment for its “faulty methodologies” and “data gaps”.

A Unicef report brings to the fore that globally still more than 800 women die every day in child birth, and 20 per cent of them are from India, as one third of Indian women of reproductive age have less than 18.5 kg/m2 body mass index (BMI), and it perpetuates an intergenerational cycle of low-birth weight-children.

Iron-deficiency anaemia (IDA) among women and adolescents is also a major public health concern. India’ 243 million adolescents (10 to 19 years), the most any country has, and 56 per cent girls and 30 per cent boys among them, and 53 per cent of women(15-49 years), as against 23 per cent of men are found to be anaemic (NFHS-4). Studies said that schooling has a great deterring influence, as it has been found to prevail about 56 per cent among women with no schooling, and 49 per cent among women with 12 or more years of schooling. In fact, UNESCO estimated that if ‘all women in low- and middle-income countries finished secondary school, child mortality in those countries would fall by about half’. Shweta Khandelwal, Head, Nutrition Research and Additional Professor, Public Health Foundation of India, also opined that ‘if women to be really benefited from any nutrition program, they need to be empowered with education, which would make them better equipped to raise healthy children, and families benefit too, now happening only in silos, which requires maximum optimisation’. Sadly, in India, ‘girls are often viewed as a transit element ….to become eligible for wifehood and motherhood, and their access to education and livelihood opportunities are often restricted …’. The International Food Policy Research Institute (IFPRI, while evaluating the impact of the India’s ICDS programme (2006 and 2016) opined that “despite a four-fold increase in the number of women and children beneficiaries, there has been lower access for the uneducated women and women from the poorest households...”

Now, a ‘Poshan Abhiyaan’ or NNM is underway to make India malnutrition-free by 2022, with a specific goal of reducing stunting a minimum of two per cent every year. Many consider its goal as “very ambitious… unless there is adequate political will and investment in nutrition… and accountability from the states”. The National Council meeting on nutrition challenges held in February this year revealed that states could utilise only “16 per cent of allocated resources (2018-19)”. Dr Shweta Khandelwal is of the view that ’NNM requires greater convergence, as it involves multiple and diverse stakeholders, so far found only in WASH (Water, Sanitation and Hygiene), while in others, it is still in nascent stages.… and expecting quick action, seems  farfetched’.

Moreover, India’s nutritional strategy until now remained focussed on post-birth interventions, while to prevent child stunting, the first 1,000 days of a child’s life — is a critical window and experts feel that ‘the issue needs to be tackled from a life cycle approach to avert  irreversible consequences’. Dr Khandelwal, commented that ‘women’s health under the NNM largely revolves around the pregnant or lactating mother, but once she delivers, the program focus turns to the baby’. Dr Prema Ramachandran, Director, Nutrition Foundation of India, also said that in “India pregnant and lactating women do not eat more as compared to a non-pregnant woman. In young women,  pregnancy, lactation and child care increase energy needs… when these needs are not fulfilled  they become undernourished.” The CESS, Hyderabad in a study pointed out that “food distribution in poor rural households is not based on need, the breadwinner gets sufficient food, the children get the next share, and women take the remains”.

Now, will it be a realisable goal to ensure “har ghar, poshan tyohar” freeing India from the shackles of malnutrition?