'Have proof Rs 5 cr demanded from Chinmayanand': SIT on UP law student

The student was sent to 14-day judicial custody after she was arrested by SIT in an extortion case filed by the politician. 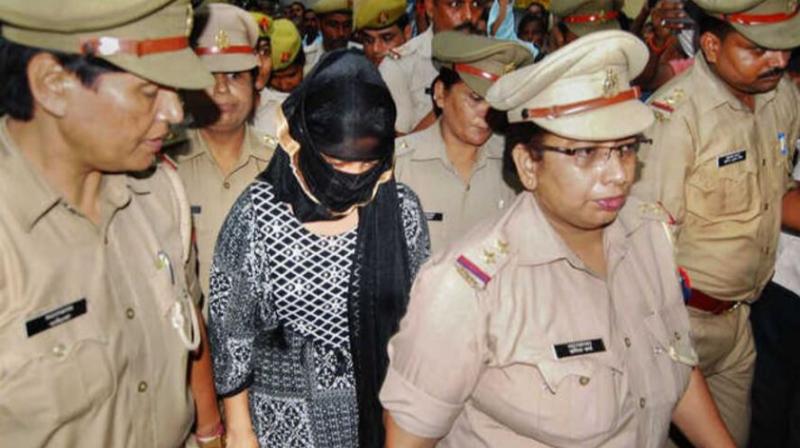 She was arrested around 9.15 am from her home in the presence of her father and brother after which she was taken for a medical examination. (Photo: PTI)

New Delhi: The 23-year-old law student, who accused the former Union minister and BJP leader Chinmayanand of rape, was sent to 14-day judicial custody after she was arrested by the Special Investigation Team (SIT) on Wednesday morning in an extortion case filed by the politician. The arrest came a day after she was detained for questioning.

She was arrested around 9.15 am from her home in the presence of her father and brother after which she was taken for a medical examination. She was then produced before the court of Additional Chief Judicial Magistrate Vineet Kumar, which sent her to 14 days judicial custody. The court is slated to hear the issue again later on Wednesday.

Speaking to reporters, Naveen Arora, Special Investigation Team (SIT) chief said, "We have enough evidences that Rs 5 crore extortion money was demanded from Chinmayanand. Those arrested said that they sent messages to Chinmayanand on directions of the girl in panic as they were not getting money and were upset.”

He further said that a number of evidence including “pen drives and mobile", have been sent for forensic examination.

According to NDTV report, the woman’s family alleged that the police arrived and dragged her out of the house ‘almost by force’, without even her slippers. She is likely to be produced before a court after a medical examination, reported News18.

On Monday, the woman was denied anticipatory bail by a Division Bench of the Allahabad High Court. The court had observed that the special bench was formed to monitor the SIT probe and if the student wanted, she could apply for an anticipatory bail in a regular court.

The Special Investigation Team (SIT) had earlier booked three of her friends after questioning them in connection to a video clip in which they were purportedly discussing extortion.

According to the SIT chief Naveen Arora, the three had accepted their involvement in the case although the law student had denied the charges. They have been booked under Indian Penal Code sections 385 (extortion), 506 (criminal intimidation), 201(disappearance of evidence), 35 (criminal act done with a criminal knowledge or intention) and 67 of the Information Technology Act.

Meanwhile, Chinmayanand who is in prison, admitted to the sexual harassment charges levelled against him. During an interrogation by the SIT on Friday, he had confessed to having called the law student for 'massages' while saying that he was ashamed of his act.