India   All India  25 Sep 2020  India tells China: We will discuss A to Z, not just south bank of Pangong Tso
India, All India

India tells China: We will discuss A to Z, not just south bank of Pangong Tso 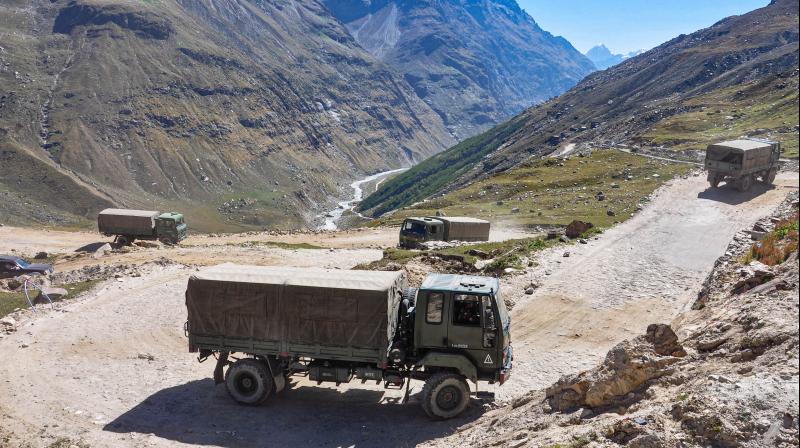 An army convoy carrying military material on its way to Ladakh amid border tension with China, at Manali-Leh highway, Saturday, Sept. 19, 2020. (PTI Photo)

New Delhi: India has clearly told China that it will talk about disengagement in the whole of Ladakh starting from Depsang plains to Pangong Tso, said sources. India has also warned China that Indian soldiers will fire if PLA troops will try to outnumber them like in Galwan on June 15.

Sources said that China is not ready to accept that it first transgressed across the line of actual control (LAC) and is insisting that talks should be held on disengagement from South banks of Pangong Tso where India has occupied strategic heights.

However, India stand is clear that “we will talk from A to Z” in Ladakh, said sources.

Sources said that China had started breaking protocol after Doklam which said that not more than 15-20 soldiers will patrol the LAC. But Chinese army started sending bigger patrol consisting of 50-100 soldiers and this number kept on increasing every year. These bigger Chinese patrol used to push Indian teams. PLA soldiers first started stone pelting and then brought improvised weapons like iron rods studded with nails to attack Indian patrols.

“Now Indian soldiers are directly warning Chinese soldiers that we will fire if you will come near us for attack. Chinese soldiers have also understood that if they will come in large numbers to attack Indian soldiers they will suffer bigger losses,” said sources. Sources confirmed that there have been many instances of firing at the line of actual control (LAC) in Eastern Ladakh since India occupied strategic heights on August 29-30. A senior official said that Indian soldiers used to carry guns previously too but now they have been given instructions that they are free to fire in self-defence and in extreme conditions.

“Now we will not allow Chinese to follow their old strategy of coming in large numbers with improvised weapons and attacking Indian soldiers,” said sources.

Sources said that China is also preparing to stay in the Ladakh sector during winters. “We cannot believe in everything China says. Joint statement is good but whatever China is saying should also be reflected on the ground,” said sources. India’s stand is that it was China which first transgressed and it will have to disengage first.