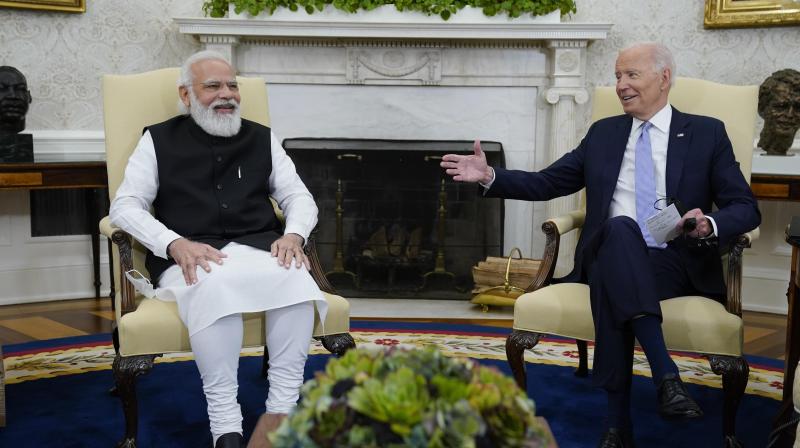 New Delhi: At his first bilateral meeting with US President Joe Biden at the White House on Friday, that is expected to have covered a host of issues such as defence cooperation, trade, climate change, Covid-19 vaccines and also discussions on the situation in Afghanistan and the Indo-Pacific region, Prime Minister Narendra Modi said “the seeds have been sown for an even stronger friendship between India and the US”. President Biden said both leaders “are launching a new chapter in history of India-US ties, taking on some of the toughest challenges we face together, starting with a shared commitment”. At the start of the meeting in front of the cameras,  the US President said he and Mr Modi would discuss “about what more we can do to fight Covid-19, take on the climate challenges that the world faces, and ensure stability in the Indo-Pacific, including with our own Quad partners”.

President Biden said that “the relationship between India and the United States, the largest democracies in the world, is destined to be stronger, closer and tighter, and it can benefit the whole world”. The US President also mentioned the India-US “shared responsibility to uphold democratic values, our joint commitment to diversity, and it’s about family ties, including the four million Indian Americans (who) make the United States stronger every single day”. The India-US strategic partnership that is set to be strengthened by Friday’s meeting is being watched keenly by a wary China.

Describing President Biden’s leadership as important, Mr Modi said that “trade will be an important factor in India-US ties in the coming decade”, and that “technology is becoming a driving force”, adding that “this decade will be shaped by talent and people-to-people linkages”.

Recalling Mahatma Gandhi’s concepts in the context of the health of the planet, Mr Modi said Gandhiji “spoke about trusteeship, a concept which is very important for our planet in the times to come”. The meeting came just ahead of the Quad summit that will begin close to midnight (Saturday IST).

There was also some light-hearted banter in front of the cameras between the two leaders, with President Biden mentioning again that he had relatives in India descended from a certain Capt. George Biden, who had worked in the East India Tea Company, with Mr Modi chuckling that he had brought along some documents in this regard for the President to see, following which the two leaders had a good laugh.

In his remarks before the media in the presence of Mr Modi, President Biden said: “I’ve long believed that the US-India relationship can help us solve global challenges,” adding that 15 years ago he had said that by 2020, India and the United States would be the closest nations in the world. Invoking India’s Father of the Nation Mahatma Gandhi, President Biden said: “We’re all reminded that his message of non-violence, respect, tolerance, matters today maybe more than ever”.

Mr Modi said: “I would like to thank the President for the warm welcome. I recall our interactions in 2014 and 2016. That time you had shared your vision for ties between India and the USA. I am glad to see you are working to realise this vision. Today’s bilateral summit is important. We are meeting at the start of the third decade of this century. Your leadership will certainly play an important role in how this decade is shaped. The seeds have been sown for an even stronger friendship between India and the USA”.

Mr Modi added: “This decade will be shaped by talent and people-to-people linkages. I am glad the Indian diaspora is making an active contribution towards the USA’s progress. Technology is becoming a driving force. We have to utilise our talents to leverage technology for the greater global good. There is much to be done in trade. Trade will be an important factor in India-USA ties in the coming decade.” The PM then added: “President Biden mentioned Gandhiji’s Jayanti. Gandhiji spoke about trusteeship, a concept which is very important for our planet in the times to come. Each of the subjects mentioned by the President is crucial for the India-US friendship. His efforts on Covid-19, mitigating climate change and the Quad are noteworthy”.

Soon after the meeting, Mr Modi tweeted: “Had an outstanding meeting with @POTUS @JoeBiden. His leadership on critical global issues is commendable. We discussed how India and USA will further scale up cooperation in different spheres and work together to overcome key challenges like Covid-19 and climate change.” Soon after this, MEA spokesman Arindam Bagchi tweeted: “A Partnership of Trust -- globally we will make a difference! Vibrant discussions between PM @narendramodi & @POTUS Joseph Biden on global, regional & bilateral issues. An expansive agenda including defence, security, health, education, trade, IT, economic, science and technology, energy & people to people ties.”