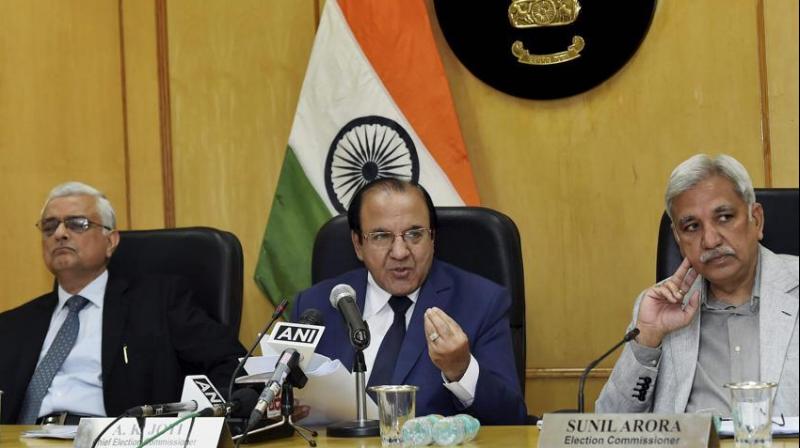 The ceiling of expenditure per candidate is Rs 28 lakhs and no candidate can spend more than the fixed amount on campaigning. (Photo: PTI/File)

New Delhi: Gujarat Assembly elections will be held in two phases on December 9 and December 14, the Election Commisssion announced here on Wednesday. Counting of votes for all the 182 seats will be conducted on December 18 along with that of Himachal Pradesh which will go to polls on November 9.

Chief Election Commissioner AK Joti announced that 50,128 polling booths will be set up in the state.

Joti said that the candidates will have to open new bank accounts for election spending.

The ceiling of expenditure per candidate is Rs 28 lakhs and no candidate can spend more than the fixed amount on campaigning.

The commission also announced that there will be 103 all-women polling stations in the state.

For security measures, CCTV will be installed at border check posts. The Central Armed Police Forces (CAPF) will be deployed well in advance and will conduct route marches for building confidence among people.

The Commission has been under attack from opposition parties for not having announced the dates for Gujarat Assembly elections along with Himachal Pradesh.

The opposition has been alleging that by "delaying" the announcement of the Gujarat polls, the EC was giving time to the BJP government in the state and at the Centre to sidestep the provisions of the model code and offer sops to the electorate to swing votes in favour of the saffron party.

After the EC did not announce the election schedule for Gujarat, the Congress had alleged it was done to enable Prime Minister Narendra Modi to play a "false Santa Claus" and announce freebies for voters before the model code of conduct kicked in.

Chief Election Commissioner A K Joti had defended the decision of announcing Himachal Pradesh's poll schedule before that of Gujarat, saying that multiple factors including the weather, flood relief work and festivities were considered before taking a call on election dates.

The CEC had said while the Gujarat and Himachal polls were announced together in 2012, their schedules were different. He also said the two states had no similarities in geography or weather patterns.