Kovind was addressing the joint session of Karnataka Legislative Assembly and Legislative Council on the 60th anniversary of Vidhan Soudha. 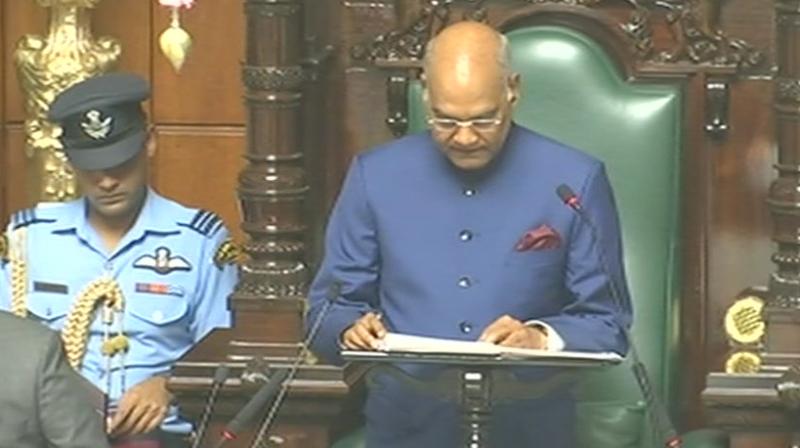 President Ram Nath Kovind's statement comes amid the controversy triggered few days back after the Karnataka government planned to celebrate the birth anniversary of Tipu Sultan on November 10. (Photo: ANI)

Bengaluru: President Ram Nath Kovind's mention of the 18th century Mysore ruler, Tipu Sultan, in his address to the joint session of Karnataka legislature on Wednesday triggered a political slugfest between the ruling Congress and opposition BJP.

The development comes amid a raging controversy over the state government celebrating the birth anniversary of the Mysore ruler on November 10. The move has been opposed tooth and nail by the BJP which sees Tipu Sultan as a "religious bigot" and a "brutal killer".

"Tipu Sultan died a heroic death fighting the British. He was also a pioneer in the development and use of Mysore rockets in warfare. This technology was later adopted by the Europeans," Kovind said while noting that Karnataka is a land of formidable soldiers.

The president's reference to Tipu Sultan came after he noted the contributions of various historical figures of Karnataka, including Krishnadevaraya who was the emperor of the Vijayanagara empire from 1509 to 1529.

As the president made the reference about the 18th century ruler in his speech to commemorate the diamond jubilee of Vidhana Soudha, the seat of state legislature, the Congress members cheered by thumping on the desks.

Tipu was a ruler of the erstwhile kingdom of Mysore. He was considered an implacable enemy of the British East India Company. He was killed in May 1799 while defending his fort of Srirangapatna against the British forces.

Opposition BJP and some outfits are opposed to Tipu Jayanti celebrations and have called him "religious bigot", "fanatic" and "anti-Kannada".

Tipu Sultan is also viewed in a negative light in Kodagu district of the state where he is alleged to have persecuted the local Kodava population, as also the Roman Catholics of Mangaluru, on religious grounds and forced conversion to Islam.

Hitting out at the state government, Leader of Opposition in the Legislative Council K S Eshwarappa alleged that the government has "misused" the office of the president by getting Tipu's name mentioned in the speech.

"I condemn it....it is an insult done to people of Karnataka by the state government. If we had raised objections when president mentioned Tipu, it would have led to violation of protocol...," he added.

He said "by trying to say that president has just read out a speech written by somebody, they are insulting the office of the president and the president."

Suggesting that the speech was prepared by president's office after collecting inputs from various sources, Rao said "...such allegations show the state of mind the BJP leaders are in."

Congratulations to Hon. President of India Shri Ram Nath Kovind for a statesman like address to the Karnataka legislature. @rashtrapatibhvn

— Siddaramaiah (@siddaramaiah) October 25, 2017Recently, Union minister Anantkumar Hegde had stirred a hornet's nest after he requested the Karnataka government not to include his name in programme invitations for Tipu Jayanti celebrations.

"(I have) conveyed (to) Karnataka government not to invite me to the shameful event of glorifying a person known as a brutal killer, wretched fanatic and mass rapist," Hegde had said in a tweet.

The Siddaramaiah-led government is all set to celebrate Tipu Jayanti despite widespread protests and violence that had marred the celebrations in the last two years.