The father was re-arrested and charged with first-degree felony injury to a child due to a conflicting statement to police. 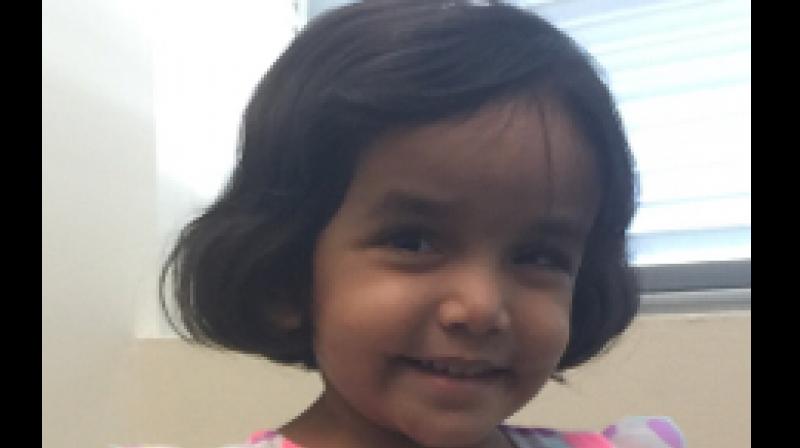 3-year-old Sherin Mathews was last seen outside her family's backyard in Richardson city in Texas on October 7. (RichardsonPD | Facebook)

Houston: Sherin Mathews, the three-year-old Indian girl missing for over two weeks, is dead, US police said on Wednesday.

Sherin, who had developmental issues and limited verbal communication skills, was last seen outside her family's backyard in Richardson city in Texas on October 7.

The Richardson Police earlier announced that they discovered the remains of a small child in a tunnel beneath a road, expressing apprehension that it was "most likely" that of Sherin. The body was found about one km from the house of her adoptive parents Wesley and Sini Mathews.

Police said medical examiners used dental records to identify the child. Her cause of death is still pending.

An arrest warrant issued by the Richardson Police detailed the "conflicting story" that led to the re-arrest of Sherin's father.

37-year-old Mathews told police that his daughter choked while drinking milk and he removed her body from the house as he "believed she had died".

He was re-arrested and charged with first-degree felony injury to a child due to a conflicting statement to police.

He said he "physically assisted" Sherin in drinking her milk when she wouldn't listen to him, according to the warrant.

"She was coughing and her breathing slowed," the warrant reads.

"Eventually, Wesley Mathews no longer felt a pulse on the child and believed she had died."

He then admitted to police that he removed the body from the home, the warrant reads.

Mathews had previously claimed that Sherin went missing after he sent her outside their home in suburban Dallas in Texas state at around 3 am on October 7 as punishment for not drinking her milk.

He was arrested then and charged with felony endangerment to a child and was placed on electronic ankle monitoring. He also surrendered his passport as a condition of making bond on October 9.

He was re-arrested for felony injury to a child after providing investigators at the Richardson Police Department with the conflicting story.

"When they came in, they provided us with some information that was contrary to what we had previously been told regarding her [Sherin Mathews] disappearance," said Kevin Perlich, Richardson Police Department spokesperson.

When asked on Tuesday about the milk story Mathews originally told police, Perlich wouldn't provide specifics because it was an ongoing investigation. All he could say was that "it was not what he told us originally."

Read: US: Father of missing Indian girl arrested day after body of a child found

The FBI seized dozens of items from the family's home and their vehicles between October 8 and 12, including a washer and dryer, electronics and DNA swabs.

Mathews, who hails from Kerala, was booked into the Richardson City Jail on a USD one million bond.

Mathews and his wife Sini reportedly adopted Sherin two years ago from an orphanage in Bihar.