The bullet-ridden corpse of Territorial Army soldier Irfan Ahmed Dar was found near a paddy field by the locals. 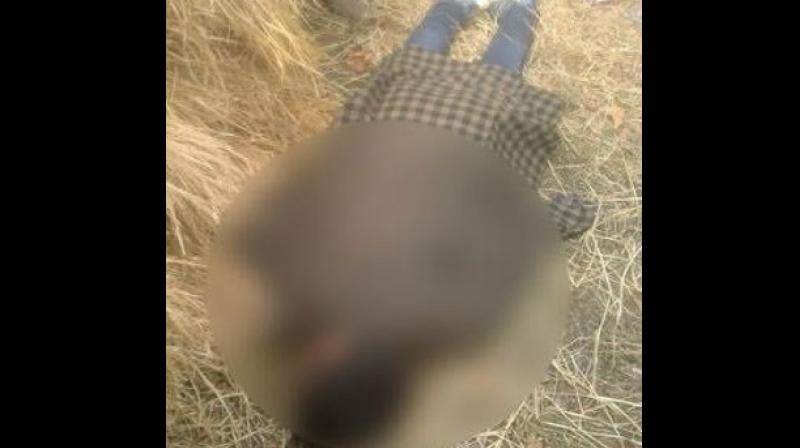 Dar, the victim, had reportedly gone on leave 10 days ago and was missing since Tuesday. (Photo: ANI)

The bullet-ridden corpse of 23-year-old Territorial Army soldier Irfan Ahmed Dar, who had gone missing on Friday evening, was found in Wuthmulla Naad village of Keegam area of Shopian on Saturday morning, the police said.

The locals said that they saw the body of Dar lying near a paddy field and immediately informed the police about it.

The victim was a resident of Shopian’s Sanzan village and was posted in the Army’s Engineering Regiment in Gurez area close to the Line of Control (LoC) in Bandipore district of the State.

“We have taken up investigations. It appears to be a case of kidnapping and (subsequent) murder and we suspect terrorists are involved,” he said.

No militant outfit active in Jammu and Kashmir has, so far, owned responsibility for killing Dar.

The deceased’s family told the police that Dar had come home on vacation. It said that he had left home in his car on Friday evening and did not return. His vehicle was found one kilometre from the place where his body was found on Saturday morning, the police said.

Chief Minister, Mehbooba Mufti, who was touring neighbouring Kulgam district as part of her ‘public outreach’ pursuit condemned Dar’s murder. She tweeted, “Strongly condemn the brutal killing of Irfan Ahmed, a brave Territorial Army soldier at Shopian. Such heinous acts will not weaken our resolve to establish peace and normalcy in the Valley”.

Her predecessor and opposition National Conference (NC) working president, Omar Abdullah, also took to micro-blogging site to condemn the killing. He wrote, “The murder of young Irfan Dar is a very tragic & reprehensible act. My unqualified condemnation & heartfelt condolences to his family.”

Dar is the fifth off-duty security personnel killed in Kashmir this year.

On October 18, a Special Police Officer (SPO) Abdul Haleem Kohli was shot dead from point blank range by suspected militants outside his house in Gutroo village of Tral in southern Pulwama district.

In October 1, a J&K police head-constable Ashiq Hussain was shot dead by two gunmen at a marriage ceremony in Pulwama’s Padgampora village. The victim, working as ‘munshi’ at Pulwama’s Awantipora police station, was on leave to attend the marriage of a close relative when targeted.

A week before it, a Border Security Force (BSF)  official Muhammad Ramzan Parray was killed and four of his family members were injured in a militant attack in Hajin area of northern Bandipore district. Parray, an official of the BSF’s 73rd Battalion, was posted in Singhpora area of neighbouring Baramulla district and had come home on holiday a few days ago when the militants attacked him with a knife before shooting him dead. His father Ghulam Ahmad Parray, brothers Muhammad Afzal and Javaid Ahmed and paternal aunt Habla Begum were injured in the attack.

On May 9, Ummer Fayaz Parray, a 22-year-old officer with Army’s 2 Rajputana Rifles was also on leave when abducted by two masked gunmen from the wedding of his (maternal) cousin in Batpora village of Kulgam district. Next morning, his bullet-riddled corpse was found in Harmain area of neighbouring Shopian district.

In March and April this year, the Valley had witnessed a series of militant attacks at policemen and their families following which the police department had issued an advisory asking its field personnel to avoid visiting their homes “for the next few months”.

It had while referring to the “unfortunate” incidents wherein “militants and anti-national and anti-social elements have caused damage to the life and property of police personnel”, asked them to exercise extreme caution while visiting their homes.

“They should preferably avoid visiting their homes for the next few months as their personal security is of paramount importance," the advisory had said.

It also asked all the heads of various formations to brief their officers and men regarding the threat so the life and property of police personnel were secured.

Meanwhile, a 16-year-old boy was found lying critically injured in Srinagar’s Nawa Kadal area on Friday evening. He had suffered multiple pellet injuries. The locals rushed him to nearby Sri Maharaj Hari Singh Hospital where doctors said that dozens of pellets had pierced his epigastrium (right upper quadrant).

“He was operated upon immediately. Many of his vital organs including right kidney have been severely damaged. Though we have plugged the big entry wound and he is stable now we do keep our fingers crossed given the damage caused to his vital organs,” said a doctor.

The deceased has been identified as Zahid Ahmed of Srinagar’s Zoonimar area. His family has alleged that he was targeted by the security forces while returning home from an examination centre.

“After targeting him he was left unattended at Nawa Kadal,” the family said.

The hospital sources said that another person was also treated for pellet injury after clashes took place in central Srinagar on Friday afternoon.