Allahabad HC had earlier ruled that the disputed land in Ayodhya be divided equally into 3 parts among Hindus and Muslims. 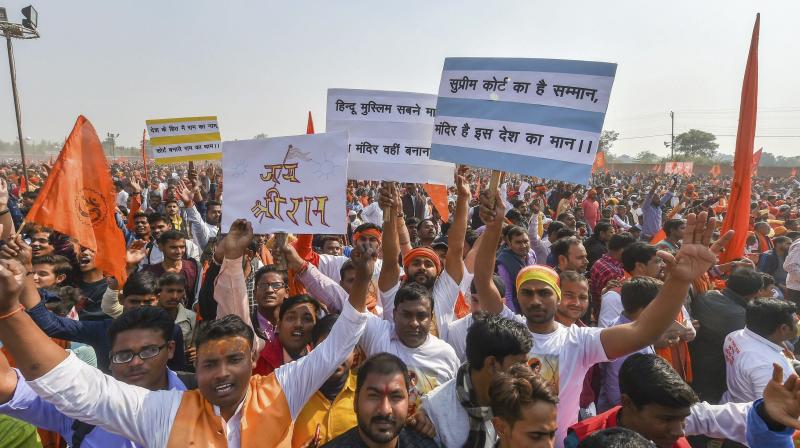 Supporters participate in 'Dharam Sabha', being organised by the Vishwa Hindu Parishad to push for the construction of Ram temple on Sunday. (Photo: PTI)

Addressing the Sabha after the inauguration marked by chanting of mantras and lighting of the lamp, the international general secretary Champat Rai said, "We want the entire land for temple construction...no formula dividing the land is acceptable."

Though Rai did not spell out the details, his assertions are considered to be in reference to the Allahabad High court verdict dividing the land into three parts.

The Allahabad High Court had ruled by a majority verdict that the disputed land in Ayodhya be divided equally into three parts among Hindus and Muslims and that the place where the makeshift temple of Lord Ram exists belongs to Hindus.

In their separate judgements on the sensitive 60-year-old title dispute on Ramjanambhoomi-Babri Masjid structure, Justices SU Khan and Sudhir Agarwal said that the area under the central dome of the three-domed structure where Lord Ram's idol exists belongs to Hindus.

Rai also said that the delay in the temple construction is not a good sign.

The religious site wore a festive look with placards, saffron flags and buntings with headgear of enthusiastic Ram bhakts all over.

The VHP which has claimed that 3 lakh people will be participating in the Sabha has made elaborate arrangements including for food and medical facilities.

While hoardings of VHP stalwart late Ashok Singhal were set up at various places, devotees were seen blowing conch shells to express their enthusiasm for the Dharma Sabha.