K'taka: Ahead of bypolls, Yediyurappa makes pitch for 'Congress-mukt Bharat'

Yediyurappa said Cong and JD(S) could hardly register their presence in the LS election. 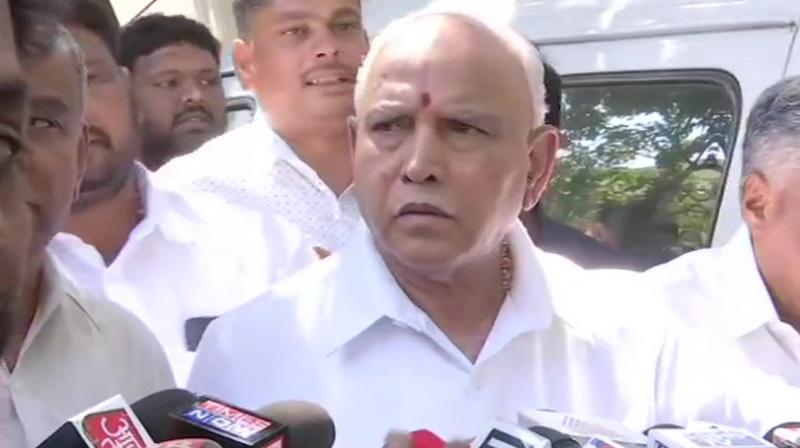 'If we have to make 'Congress-mukt Bharat' then it should be 'Congress Mukt Karnataka' first. It should begin from here," he said addressing an election rally at Kamalapurain Vijayanagar Assembly constituency from where Anand Singh is contesting on a BJP ticket. (Photo: File | ANI)

"If we have to make 'Congress-mukt Bharat' then it should be 'Congress Mukt Karnataka' first. It should begin from here," he said addressing an election rally at Kamalapurain Vijayanagar Assembly constituency from where Anand Singh is contesting on a BJP ticket.

A party hopper, Singh was previously elected on a Congress ticket and was among the MLAs to resign from the Assembly rebelling against his party.

He was among the 17 Congress-JDS MLAs who were disqualified by the then speaker K R Ramesh Kumar in July.

After the Supreme Court allowed the disqualified MLAs to contest the December 5 bypolls, Anand Singh joined the BJP again and is contesting on the party ticket from Vijayanagar.

Yediyurappa said he "never knew in his life what lies are" but people did not trust him when he said BJP would win at least 22 seats in the last Lok Sabha elections in Karnataka.

"I never knew in my life what lies are. When I said that we will win 22 Lok Sabha seats, people mocked at us but we actually won 25 seats. Congress and the JD(S), the (then) ruling coalition could win only one seat each," he said.

Speaking about the "pathetic" performance of the previous ruling coalition of Congress and JD(S), Yediyurappa said the two parties could hardly register their presence in the Lok Sabha election.

Ridiculing Congress, Yediyurappa said, "Congress doesn't even have the required number of MPs in the Lok Sabha to be called the principal opposition party. This is the condition of Congress today."

Heaping praise on Singh, Yediyurappa said he was the first among the 17 MLAs who had resigned from the Assembly.

Till then, he had no clue that the BJP would form a government in Karnataka.

"It was Anand Singh who resigned first and later others too joined him. He was discontent with the lack of development and hence he decided not to stay in the Congress for long," the Chief Minister said.

Yediyurappa asked the people to ensure Singh's victory so that he becomes a minister in the BJP government and helps the government develop the area as a model constituency.

Bypolls are scheduled to be held in 15 Assembly constituencies on December 5.