In LS, Congress leader Rahul Gandhi said democracy has been murdered in Maharashtra. 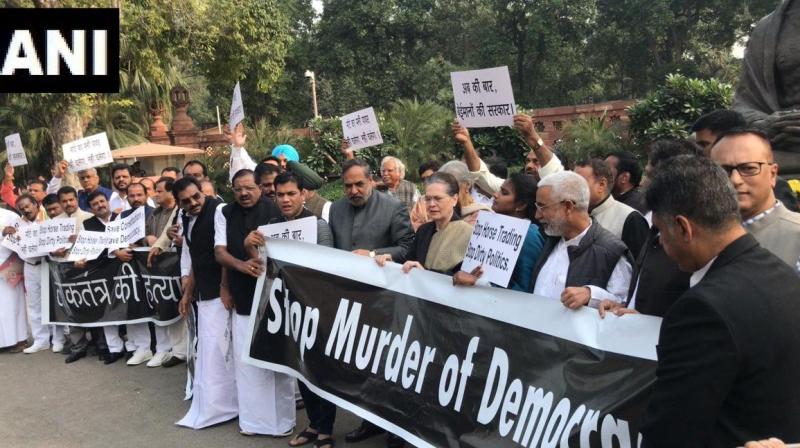 New Delhi: Congress president Sonia Gandhi on Monday led a protest in Parliament premises against the BJP's move to form the government in Maharashtra as senior leaders from the opposition party raised slogans against Prime Minister Narendra Modi.

Terming the midnight coup in which the BJP formed the government with Ajit Pawar as "murder of democracy", Congress leaders including Ahmed Patel, Anand Sharma, Adhir Ranjan Choudhury and Shashi Tharoor raised slogans and held placards criticising the BJP and demanding 'justice'.

The protest was held in the Parliament House complex.

In the Lok Sabha, Congress leader Rahul Gandhi said democracy has been murdered in Maharashtra.

"There is no question of asking a question (in Question Hour) today. Democracy has been murdered in Maharashtra," he said.

The Maharashtra government formation issue rocked both the Houses on Monday.

Rajya Sabha proceedings were also adjourned for the day after the Congress and other opposition parties stalled the functioning of the House over the situation in Maharashtra.

The move jolted the Congress, the NCP and the Shiv Sena, who were giving final touches to government formation in the state, but rattled the NCP the most due to Ajit Pawar''s rebellion.